While I've been remiss in my security postings lately, the smörgåsbord format is pretty handy for when there's a lot of news. Since there's a lot of climate science news, I'm starting a new feature here.

The Dog Ate My Data

A press release by the New Zealand Climate Science Coalition (NZCSC) reveals that New Zealand’s weather bureau (NIWA: The National Institute of Water and Atmospheric Research) no longer holds any records supporting its “adjustments” and manipulation of its official raw temperature observations. From Scoop,

"In December, NZCSC issued a formal request for the schedule of adjustments under the Official Information Act 1982, specifically seeking copies of “the original worksheets and/or computer records used for the calculations”. On 29 January, NIWA responded that they no longer held any internal records, and merely referred to the scientific literature."

The IPCC reports continue to unravel

Remember the IPCC reports, and how everything in them is the best-of-the-best, uber-researched and peer-reviewed out the wazoo? Remember how dozens of the "scientific papers" cited in it are press reports from Greenpeace and the World Wildlife Federation? Well, that train is still a-rollin':

Following an investigation by this blog (and with the story also told in The Sunday Times), another major “mistake” in the IPCC’s benchmark Fourth Assessment Report has emerged.

Similar in effect to the erroneous “2035″ claim – the year the IPCC claimed that Himalayan glaciers were going to melt – in this instance we find that the IPCC has wrongly claimed that in some African countries, yields from rain-fed agriculture could be reduced by up to 50 percent by 2020.

At best, this is a wild exaggeration, unsupported by any scientific research, referenced only to a report produced by a Canadian advocacy group, written by an obscure Moroccan academic who specialises in carbon trading, citing references which do not support his claims.

And it's not just the Fourth Assessment Report (AR4); people are finding dozens of Greenpeace citations in AR3, too.

The press continues to be AWOL on this story, except for the British press

Interestingly, they're all over it like stink on a dog. Everyone else, not so much:

Nothing prevented Ms. O'Neil from taking a firsthand look at the IPCC report herself. She, like me, could have typed "WWF" (which stands for the activist group, the World Wildlife Fund) into a search box and found the 16 distinct WWF citations in the IPCC's 2007 report. Within a few minutes she could also have found the eight Greenpeace papers listed.

In the process she might have noticed that one of her scientific experts - Professor Ove Hoegh-Guldberg (whom she quoted as saying: "I don't think you could have a more rigorous process") - is a co-author of one of those non-peer-reviewed Greenpeace papers.

Instead, Ms. O'Neill - who has 25 years experience as a journalist - was utterly bamboozled by the PR machine which is the IPCC. She fell for their slick mirage. And then she passed it along to her viewers and readers.

And there's quite a good Mark Steyn post on this. Insty excerpted a short amount, but you should really RTWT, which is much longer, and spot on.

Washington DC getting too warm for snow

From his talk in Melbourne.

You can't make this up, you know. We've all heard how the skeptics* are all in the pay of Big Oil, right? Well, soft-core pornographer and IPCC President Rajendra Pachauri's publisher threw a dinner/drinks bash to launch his novel. The bash's sponsor? British Petroleum.

Professor Phil Jones of Climategate fame is so upset he contemplated suicide. Not much sympathy over at Ann Althouse's place. While I continue to believe that Dr. Jone's career is over, I hope he gets help. Nobody deserves to end that way.

No need to thank me, it's all part of the service

A referral led me to this astonishing Google search. #3 out of almost a million. 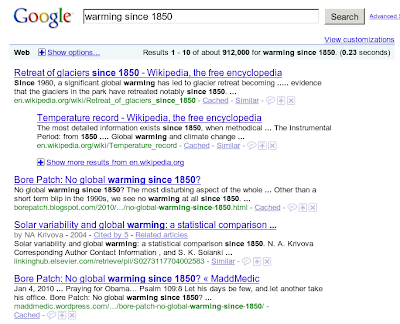 It's actually a good post, covering what is IMHO the most disturbing aspect of the whole warming debate - the way that the raw data has been folded, spindled, and mutilated to such an extent that it's no longer recognizable. If you have to be at the top of Google for something, this at least is doing a public service.

And a shout out to Madd Medic for helping to goose the rankings! Even though he's a Denier.

So that's how the Greenhouse science works

Counting Cats in Zanzibar lays it out. I hadn't really understood precisely how it works, but he clarifies it. The Cliff Notes' version: air pressure. Srlsy. And he has an update.

He doesn't take either a pro- or anti- AGW stance in this post, but just walks us through the science. But he's a Denier, anyway.

There you go - all you Deniers are now up to date. Now get the heck off my lawn!
Posted by Borepatch

Your ranking is actually #2, not #3. The first "two" are actually a main link and a sublink tying back to the main page. You can't count that as a separate one since Google grouped them together only for reader convenience.

Phil Jones was part of a cabal that attempted to instigate a royal rogering of the economies of industrialized nations. He is a contemptible pussy. He and his ilk need to see their careers destroyed, and I believe that jail time might be in order as well.

That said, he is a child of God, and it would be wrong of me to wish death upon him. So very, very wrong. Definitely wrong.