I'm a great admirer of The Gormogons - I mean, who doesn't like a multi-century secret society dedicated to the restoration of the Kingdom of Poland-Lithuania (among other things)? One of the things I most admire about their organization is their outstanding use of Operatives.

Man, I need to get me some operatives, I said to myself. And so I did.

Boy, they come in handy. Borepatch Operative Chad reports from Washington DC, where the snow is so think and heavy that it broke through a skylight in the hotel. 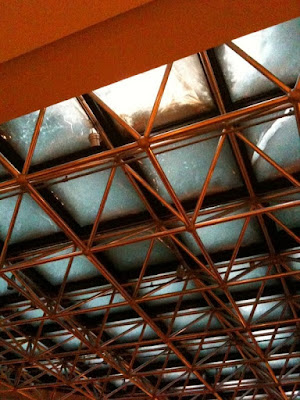 It's the middle skylight at the top of the photo that's all done been busted. Washington DC seems to be getting two inches of wet, heavy Global Warming per hour. Yikes.

You have to understand that we live near Chicago, and this sort of crap doesn’t faze any of us. Especially post-Blago. So some roided up guy tried to slice the throat of his hooker wife? That’s a typical afternoon for a Chicago alderman. And he’d still have time to call all of us racists.

Man, I need to get me some sang froid ...
Posted by Borepatch

Labels: liveblogging, me me me, ZOMG

And as you know, the Gormogons are all avid readers of the Borepatch, as well.

When we eventually get around to finalizing world domination (at least, a bit more than we've got it already), Borepatch will wind up in charge of a major piece of world real estate. Hint: think really, really big. And he may fire off anything he desires there.