Tough weeds were what I saw in Spring,
and Winter's dreary damage:
dead stems and broken branches.
Clean up! Replace! Repair! I'd think.

Angkor Wat is a World Heritage site, for good reason.  The ruins of a mighty civilization, long lost, now overgrown by the riotous growth of the jungle - this captured the imaginations of 19th Century European explorers raised on Shelly:


And on the pedestal these words appear:
"My name is Ozymandias, king of kings:
Look on my works, ye Mighty, and despair!"
Nothing beside remains. Round the decay
Of that colossal wreck, boundless and bare
The lone and level sands stretch far away.

Or in the case of Angkor, trees and vines vying with each other to grow ever higher towards the sunlight.  Locked in fierce competition with other plan forms, the largest choke out their rivals while swallowing up the decay of a once glorious civilization.

That garden needs pruning, is all I can say.  As does the garden of government regulation and Agencies vying with each other for budget, headcount, and power:


The problem here is that in business, there’s a clear and measurable indication of success and failure: profit.

And vying with us, and our freedoms.  Perhaps a reorganization to increase efficiency?  Alas, no: 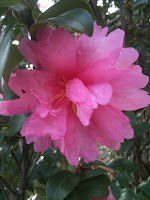 The only way to bring an overgrown garden back to usability is by heavy use of the pruning shears.  Ruthlessly loping branches that have smothered fairer flowers is the only remedy.  The blooms long forgot will find that they can blossom forth in the liberty of the new found sunlight.

There is no alternative but down sizing the Agencies.  The cost of the headcount is the minor annoyance - I'd even consider paying the taxes to support them if they promised not to every actually do anything.  No new regulations.  No notices to the public.  No Request for Proposal.

But that's not the imperative of growth and ambition.  And so they have to go.  Cut each agency by 40%, eliminate some outright, and let's see what flowers spring to life in Liberty's garden.
Posted by Borepatch

I like your premise & conclusion, sir. Now if there any chance whatsoever of making it happen ...

None but the wookie.

This shouldn't be a surprise to anyone who has ever dealt with a bureaucracy.

The First Rule of Bureaucrats: Hold on to the power you have, by any means necessary.

The Second Rule of Bureaucrats: Add to the power you have, as much as you can, as often as you can.

The only way to stop a bureaucracy from growing is to periodically lock the doors and burn it to the ground, then bring in all-new workers who are more interested in doing their jobs than in accumulating power.