Some day no one will answer at all


Florence Green, the world’s last known surviving veteran of World War I, died in her sleep Saturday at the Briar House Care Home in King’s Lynn, eastern England. She was 110.

When I was a boy, the old veterans at the July 4th parades were from the Great War.  There were quite a number of them, fifty years after the end of the War To End All Wars.  45 years later, they're all gone now.

It brings to mind what may be the greatest song about that war ever written - actually written to protest Vietnam, but a fitting tribute to the futility of the trenches with it's boredom and filth taking up the time between the terror from the terrible lash of artillery.


And the band plays Waltzing Matilda
And the old men still answer the call
But year after year, their numbers get fewer
Someday, no one will march there at all

Remember that they were young once, and went rambling the life of a rover.  Or like Mrs. Green, waltzed with pilots. 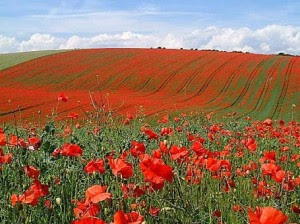 I actually prefer Bogle's Green Fields of France, in this version by the Fureys:

We are losing our time machines.

I am with Bob, I thought that would be the song you would pick. . .

The civilization we inhabit is in fact long dead, but we look nervously over our shoulders and see the cooling corpse continue to twitch, then tuck our heads down and pretend nothing's wrong.

Very nearly all the ills that face us now as men of the West stem directly or indirectly from that war. The decadence and denial, the collapse of the British Empire, the rise of genocidal Bolshevik regimes in China and Russia, the Moslem terrorist groups like the PLO and PFLP they created and armed and fed, and the near-fatal weakness and lack of resolved shown by US leaders in the 70s, are why American troops are chasing Uzbek border-bandits in Afghanistan today in a war we neither have the will nor the money to win decisively, nor yet can afford to be seen to lose.

Read Kipling's "Recessional," and remember how quickly it all fell apart for them and how quickly they turned into a third-rate regional power with a moribund economy and a dwindling population of taxpayers, colonized by savages from their former colonies.

And remember that "memento mori" applies to the nation-state as well as to the individual.

... what may be the greatest song about that war ever written - actually written to protest Vietnam...

?? Both that song and its ancestor are Australian. Australia didn't suffer nearly as much, nor see nearly the antiwar turmoil, that the United States did from the Vietnam War. I see no reason to think it holds any meaning beyond the obvious: the very defensible belief that the Australian men who died in the First World War died for nothing.

Wolfwalker, I guess it was seen as an allegory. But I do think that the Australian people see Gallipoli as a complete waste.

To those two Eric Boggle songs add John McCutcheon's "Christmas in the Trenches" and you've the trifecta of depressing songs.
If you'll excuse me I've some whiskey to drink in memory of my Grandfather Smith and my Great Uncle Lawrence, both wounded in 1918.

Stretch, raise a glass to them for me.

Borepatch it should be pointed out that Gallipoli was not a pure ANZAC operation it also had troops from the UK and France probably in equal or greater numbers.
As for why it was a waste is purely tactics used at that point of the war, it took a while to figure out creeping barrages and why it's a good idea for your troops to be just behind that and not say wait until it's over.
Also pah Great War I remember the Boer war veterans.

I always like to say "Gallipoli" when someone starts waxing both rhapsodic and nostalgic over Churchill (you want to find yourself ready to sign on with Nock and Rothbard, just read Massie's Dreadnought and Castles of Steel back to back sometime), and it's even more fun when the interlocutor is comparing Noot Buonaparte favorably to Winnie...

...but in Winnie's minimal defense, at least he went and slept in the trenches with a battalion on the Continent for a while.

That's the first time I've ever heard Bogle's own version. I've heard the Pogues' version about a million times.

I was in a bar where they had a live band playing Irish/scottish folk songs and you know how they go - some are filthy, obscene and funnier than hell and you got laughing cramps listening to them.

Then they played this tune and the place literally went silent. Some of us were blinking back tears. I haven't heard that tune since.

Thanks for posting that BP.

Anonymous, that's where I first heard it - Barstan's pub in Orono Maine. 2cents and I would hang out and listen to Schooner Faire, and they did that one.

We'd all be dead silent for this, and it would be pretty misty as they ended with their trademark a capella harmony.

It's stuck with me, that's for sure.