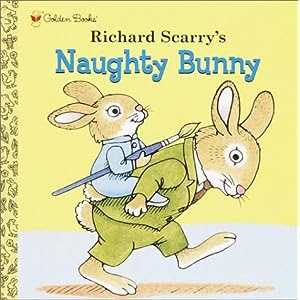 I never much cared for the Richard Scarry books when the kids were little, but that didn't matter.  The kids loved them - well, this one, anyway.

The bunny is simply a hellion, always getting into trouble and driving his poor mother to distraction.  Even when Dad takes him aside, he can't remember to change his ways.

But it's a children's book, and so all comes out well in the end.  So much so, that the bunny is a "naughty little angel".  In a sense, the book is a lesson on Grace.

Little One-Eyed Dog was a hellion, who drove us to distraction.  She was a rescue dog, grown when we got her.  By "we" I mean "everyone but me": I met her when I came home from work one day, and there was this little dog playing in our yard.  Did one of the neighbors' dogs get out I asked.  And suddenly nobody would make eye contact. I see how it is, I thought. And so I went to make friends with out new pet.

She was tough, which is what she'd needed to survive on the mean streets of San Juan.  Her eye had been infected when she was forwarded to the Shelter, and they couldn't save it.  It didn't slow her down.  A little dog, she was fast and quick, and loved to run for the joy of running - we called her "turbo dog" when she did that, and it was simply fun watching her have the fun of reaching Mach 2.

But she was a sweetheart, too - quite a lap dog who quickly took a shine to me above all others.  I've always taken to big dogs, but she knew how to let the Angel of her Better Nature shine.  Sometimes.

You see, she never entirely lost her old survival instincts.  She'd hoard food, hiding it from everyone.  She'd sneak off and pee in corners, marking her territory - even after bringing her in from a walk.  Sneaky.  It was a good thing that she was so cute.

But nothing lasts forever, especially pets.  The cancer came on quick, and hard: ten days after taking her to the vet, we were back to end her suffering.  Even two days before she'd pranced as I went to let her outside; the night later she was refusing water.

We buried her in the back yard where she so liked to go into Turbo Dog mode, and the boys impressed me by helping to dig her grave.  We covered it with a slab of marble that used to be a coffee table top, but had broken in two on the move to Camp Borepatch.  It's a nice marker. 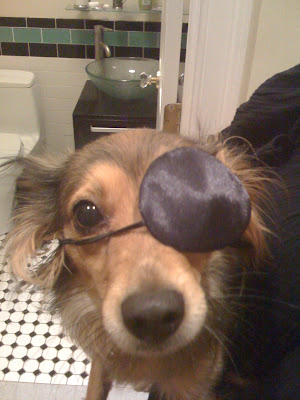 The time I had the pleasure of her company I found her to be an angel...
You are very correct-
She was a sweetheart...


I'm sure you know your Kipling...

THE POWER OF THE DOG
There is sorrow enough in the natural way
From men and women to fill our day;
But when we are certain of sorrow in store,
Why do we always arrange for more?
Brothers and sisters, I bid you beware
Of giving your heart to a dog to tear.

Buy a pup and your money will buy
Love unflinching that cannot lie--
Perfect passion and worship fed
By a kick in the ribs or a pat on the head.
Nevertheless it is hardly fair
To risk your heart for a dog to tear.

When the fourteen years which Nature permits
Are closing in asthma, or tumour, or fits,
And the vet's unspoken prescription runs
To lethal chambers or loaded guns,
Then you will find--it's your own affair
But... you've given your heart to a dog to tear.

When the body that lived at your single will
When the whimper of welcome is stilled (how still!)
When the spirit that answered your every mood
Is gone wherever it goes--for good,
You will discover how much you care,
And will give your heart to a dog to tear!

We've sorrow enough in the natural way,
When it comes to burying Christian clay.
Our loves are not given, but only lent,
At compound interest of cent per cent.
Though it is not always the case, I believe,
That the longer we've kept 'em, the more do we grieve:
For, when debts are payable, right or wrong,
A short-time loan is as bad as a long
So why in Heaven (before we are there!)
Should we give our hearts to a dog to tear?

In memory of my angels: Sophie, Sebastian, Maggie & Honey

Somewhere special she's got her eye again, and she's racing like mad again, just for the love of running.

They light up our lives, drive us crazy, and break our hearts.

For some strange reason one day a guy at work saw fit to try to convince me that because one of my cats has physical problems I should have him destroyed and just get another. After all, he was just a cat. I just kept repeating "I love my cats way more than I love you." He thought I was kidding.

So sad to read. We have a rescue dog of very similar qualities who owns my heart. Please accept my sincere condolences.

I ran across this some time back:

A Dog's Purpose
Being a veterinarian, I had been called to examine a ten-year-old Irish Wolfhound named Belker. The dog's owners, Ron, his wife, Linda, and their little boy, Shane, were all very attached to Belker and they were hoping for a miracle.

I examined Belker and found he was dying. I told the family we could not do anything for Belker and offered to perform the euthanasia procedure for the old dog in their home.

As we made arrangements, Ron and Linda told me they thought it would be good for six-year-old Shane to observe the procedure. They felt as though Shane might learn something from the experience.

The next day, I felt the familiar catch in my throat as Belker's family surrounded him. Shane seemed so calm, petting the old dog for the last time, that I wondered if he understood what was going on. Within a few minutes, Belker slipped peacefully away.

The little boy seemed to accept Belker's transition without any difficulty or confusion. We sat together for a while after Belker's death, wondering aloud about the sad fact that animal lives are shorter than human lives. Shane, who had been listening quietly, piped up, 'I know why.'

Startled, we all turned to him. What came out of his mouth next stunned me. I had never heard a more comforting explanation.

He said, 'People are born so that they can learn how to live a good life -- like loving everybody all the time and being nice, right?' The six-year-old continued, 'Well, dogs already know how to do that, so they don't have to stay as long.'

What a sweet tribute. Sorry for your loss.

I'd add that dogs also know how to sneak off and pee in the corner right after you bring them back in from a walk, but it was touching nevertheless.

I am so sorry BP. In the end all we can do is love them as best we can and let them go when it's time. Tears in the Six household this morning.

Borepatch, sorry to hear about your Naughty Little Angel. Hope you and your family will always fondly recall the happiness that she brought to each and everyone of you.

FYI - I'm going to go and find that "Naughty Bunny" book so I can read it to my granddaughter, even if she is only 3 weeks old today.

And Bitey Rajah asked me to tell you that a certain penchant for mischief just adds character to the kitty. (Or puppy.)

We have them for too short a time . Condolences to the entire Borepatch family on the loss of her .

It's the hardest part of having anything that gets close to your heart. Sorry to hear that you had to let your friend go, but you'll see her again someday.

Thank you for sharing this with us.

Found this via Six at TheWarriorClass.
You have my condolences on your loss. I'm a real softy for canines of all breeds, and I always hate to hear of a four-legged family member passing.

Heaven has two more Bright Stars shining down upon the earth... waiting...
Condolences, BP. Mayhap your Naughty Little Angel and my Shiiba are romping and getting to know each other as they wait...

I've said it before and I'll say it again - if whe, God willing, I finally get to heaven, if all the dogs I've known and loved in my life aren't there waiting for me, I'm going to be pissed.