Sometimes what happens spontaneously, by happenstance, in an unexpected twinkling of the eye - that changes everything.  Chris Lynch (all Red Sox fans read him every day, right?) reposts on the time that the Red Sox Captain Jason Varitek made the Yankees' A-Rod eat glove leather:


Being hit by a pitch is part of the game. That's why they keep a stat for it. When you are hit - you are supposed to go down to first and take your base. But I guess A-Rod is different. I guess A-Rod is special.

Instead of taking his base A-Rod starts swearing out at Red Sox pitcher Bronson Arroyo (who was named after Charles Bronson we should be reminded - so I wouldn't doubt if Bronson could handle himself in a pinch).  Jason Varitek, as is his job, stays between A-Rod and the pitcher's mound.

A-Rod then changed his focus to Varitek. The TV cameras clearly show him saying, "Fuck you" over and over right in Varitek's face. It then showed A-Rod saying "Let's go" to Varitek. Should he be surprised that Varitek gave him a catcher's mitt in the mug for his troubles? 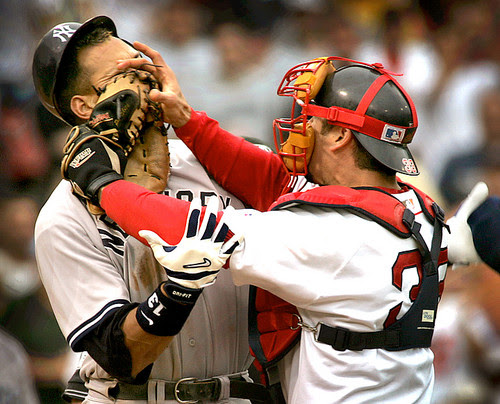 July 24, 2004 is the game generally seen as the turning point in the to-that-point moribund Red Sox season.  By making the overbearing Yankee pretty boy ear leather, Veritek fired the team and sparked the most amazing come back in sports history.  Even with the spark, the Sox found themselves trailing the Yankees, down three games to none in the ALCS.  They struggled the whole game, and were trailing 4-3 in the 9th inning.

The rest is history.  They beat the Yankees, coming from behind.  Then they swept the remaining four games to take the pennant.  At this point, it would have taken an Act of God Himself* to change fate, and they Swept the Cardinals to win their first World Series in 86 years.

Two days later I was talking to a business colleague in New York.  He wished me the best enjoying the only Championship the Sox would win in the next 86 years.  I replied that his mouth was moving, and sound was coming out, but all I could hear was a huge choking sound.

Thanks for the memories, Captain Veritek.

* Of course the Lord roots for the Red Sox.  You have to have deep, deep faith to be a Sox fan.
Posted by Borepatch

Don't you mean "the biggest choke in sports history"?

I adore the Sports Guy running diary from that game. At one points he writes that he has no memory of the last few minutes and believes he passed out. Really brings you back to every excruciating passed-ball moment of tense agony.........

Sweet...I remember watching that game and thinking..that's the way to do it Tek. No BS , no theatrical gesturing..just a "...let me help you fill that hole under your nose, pansy"
Thanks for the memory.

To think that punk was this close to being a Sox.

A Red Sox fan calling someone else's team chokers? That's rich. But I must admit, A-Rod eating that mitt was nice. (Of course the only team I hate more than the Sox is the Yankees. Yes, I am a Dodger fan...)

Pete, I think that the Yankees own the registered trademark for the term "choke" - any team trailing 3-0 in the playoffs anywhere will cause the announcers to bring up the 2004 Yankees. Sweet.

BTW, Mrs. Borepatch is a Dodgers fan, too.