So what'd ya get?


The goal of National Ammo Day is to empty the ammunition from the shelves of your local gun store, sporting goods, or hardware store and put that ammunition in the hands of law-abiding citizens.  Make your support of the Second Amendment known—by voting with your dollars!

There are an estimated 75 MILLION gun owners in the United States of America.  If each gun owner or Second Amendment supporter buys 100 rounds of ammunition, that’s 7.5 BILLION rounds in the hands of law-abiding citizens! 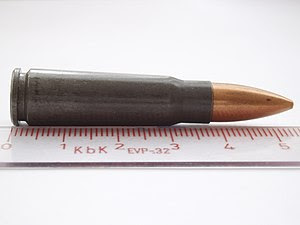 So there's still time to do your part.
Posted by Borepatch

Well, the point is to deplete warehouses. I'd say that'd do it.

Gee, I just got a thousand rounds of .223 that Cabelas had on sale for $300. But that was over a week ago. Guess I'd better get something else.

Here's something in today's email - great timing. $1 shipping at Bass Pro if you buy over $50 worth, which is pretty darned easy.

I'm picking up a couple hundred rounds of 9mm so that my Browning won't feel ignored.

I made 120 rounds of medium level 10mm, went and shot some of it along with some previous production. Came back with more brass than I shot, as usual.

I hope next year it'll be cheaper. (grin)

There seems to be something off about that 7.62x39 round you show.

Anonymous, I stole the pic from Wikipedia.