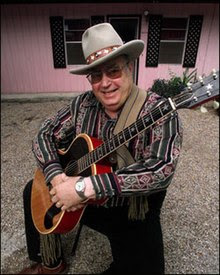 Today is the South Texas Blogshoot, and yesterday was Veteran's Day.  What better music to celebrate these with than a great song by a veteran.  Don Walser was a Texas National Guardsman for years and years.  While he wrote and performed a lot of music, his Guard career kept him from going to Nashville.  As a result, be became one of the best known Country artists in Texas, while being little known outside the Lone Star State.

He was an interesting meeting of the old and the new.  Influential in the Alt-Country scene, he still preserved the Old School country from the 1940s and 1950s.  He was also known for his yodeling, and called the Pavarotti of the Plains.  Quite a contrast, right there.

Today's song wasn't one of his, but rather one of the old greats he helped keep alive.  Shotgun Boogie was one of Tennessee Ernie Ford's hits from way back.  No yodeling, just great toe tapping music.


There it stands in the corner with the barrel so straight
I looked out the window and over the gate
The big, fat rabbits are a-jumpin' in the grass
Wait'll they hear my old shotgun blast
Shotgun Boogie I done saw your tracks ...
Look out Mr. Rabbit when I cock my hammer back.

Well, over on the ridge is a *scaley bark
Hick'er nuts so big you can see 'em in the dark
The big fat Squirrels they scratch and they bite
I'll be on that ridge before daylight
Shot-gun Boogie all I need is one shot ...
Look out bushy tail, tonight you'll be in the pot.

Well, I met pretty gal she was tall and thin
I asked her what she had, she said: "A FOX 410."
I looked her up and down and said: "Boy, this is love."
So we headed for the brush to shoot a big fat Dove
Shot-gun Boogie boy the feathers flew ...
Look out Mr. Dove when she draws a bead on you.

I sat down on a log, took her on my lap
She said: "Wait a minute, bub, you got to see my pap,
He's got a 16-gauge choked down like a rifle
He don't like a man that's a-gonna trifle."
Shot-gun Boogie draws a bead so fine ...
Look out big boy, he's loaded all the time.

Well, I called on her pap like a gentleman oughter
He said: "No brush hunter's gonna get my daughter."
He cocked back the hammer right on the spot
When the gun went off, I outran the shot
Shot-gun Boogie I wanted wedding bells ...
I'll be back little gal, when your pappy runs out of shells.

Made of win, right there.
Posted by Borepatch

I first became aware of him when I saw "Hi Lo Country". He was a treasure. I love his work and became a big fan. Too bad he did not take care of himself because diabetes is indeed a fatal disease.