Since Mom and Younger Brother are visiting FOB Borepatch, I have a reason to pull out the stops and cook.  And "pull out the stops" means baking (at least for me, I mean anyone can cook).  And baking means Aunt Charlotte's dinner rolls.

She was a neat lady, actually my Great Aunt.  She taught Home Economics for 40 years, and so she really knew what she was doing.  Yesterday, I made her rolls, and because all y'all have been read on to the special compartmented BAKING classification, here's her recipe.*


Dissolve 1½ cakes of yeast (a cake is the same measure as an envelope of dry yeast) in ⅓ cup of warm water, with half a tablespoon of sugar.

Spank (her description, not mine) and knead the dough until it just barely does not stick to the board.

Knead the dough a second time - as she described it, "to see if it is still enough".  I don't know what this means, but the dough should never be particularly stiff.

Form the rolls and let them rise until light.  Optionally, baste with an egg wash for better browning.  Bake for 15-20 minutes in a 425° oven.

Two things to point out: the amounts here are half what her recipe calls for.  Aunt Charlotte made a lot of rolls.  Also, I only used half this (made 15 rolls), and saved the other half of the dough for Cinnamon rolls:


Roll out the dough until it's a square roughly 12 inches on a side.

Sprinkle with brown sugar (you'll need at least a cup).

Sprinkle with cinnamon, nutmeg, and allspice to taste (remember, a little allspice goes a long way)

Put on a baking sheet and let rise one last time before baking.  I like to let them rise overnight in the refrigerator.  Just remember to pull them out 30 minutes before baking.

There you have it.  You'll never eat a Cinnabon again.  And remember, if you use Aunt Charlotte's original quantities, you'll have two dozen dinner rolls and two dozen cinnamon rolls!

* Remember, this is classified, so don't tell anyone. 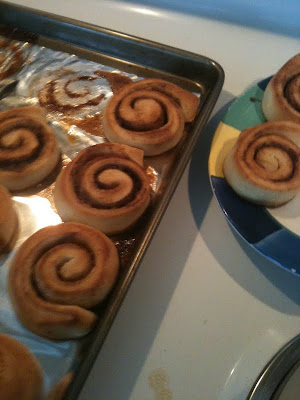 I hope you had a good Thanksgiving!

That's incredibly impressive, Borepatch. I was excited I made cranberry bread! none of that dough spanking shenanigans though. lol

I will try this for the Christmas meal! Thanks for sharing!

I just want you to know I'm going to hold you responsible for blowing my diet... I LOVE cinnamon rolls... sigh

> Knead the dough a second time - as she described it, "to see if it is still enough". I don't know what this means, but the dough should never be particularly stiff.

Don't know what she means by it either, but a second kneading (often called a "punch down") is a typical thing in baking: it redistributes the live yeast to be in contact with unconsumed carbs that they can munch on.