On my misspent (gaming) youth

As a kid, I played the usual sorts of kid's board games - Risk, Stratego, that sort of thing.  But my world changed on the Christmas of 1969 when Older Brother got the Jutland game as a present.

This was Jim Dunnigan's first game (yes, that Jim Dunnigan), pitting the Dreadnoughts of the Royal Navy against the Kaiser's High Seas Fleet.  And I was hooked, in a big way.

Stretch left a comment to yesterday's post about gaming, hearkening back to the days when Giants Walked the Earth:

Roll those die and let the gaming begin.

I thought I'd died and gone to heaven when I discovered Steel Panthers ... a digital form of PanzerBlitz!! Keep your joy sticks.
If it doesn't have a diesel engine and pack at least a 75mm gun it's not gaming. 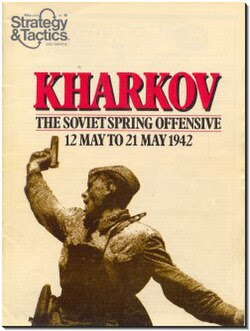 Yeah, we got Panzer Blitz, too, where I learned to love the 81mm mortar.  And that led to the hard core drug, from the pushers at Simulation Publications, Inc, the publishers of Strategy & Tactics.  Each month you got a magazine full of military history, and a brand new game.  Yeah, I got the issue shown here.  Don't remember much about the game (other than Yeah, I got it), but I must have gotten something like 60 games from S&T.  Plus a bunch that SPI published that weren't included in the magazine.

I suspect that Mom & Dad wondered if I'd date girls, at least for a while.

So Stretch's comment really took me down memory lane.  For those of you who might care (i.e. are as big a nerd as I), here are the games that I spent a lot of time playing, back in my misspent youth.

Strategy I.  This was a generic gaming design, where the (made up) map would let you play scenarios ranging from Dark Ages Hungary through the 30 Years War to the World Wars and beyond.  It was insanely complicated, which as you can imagine totally appealed to my young, intellectually precocious self.  The units would change based on the scenario, with the Armor unit representing Panzer divisions or Hungarian Cavalry, depending on your scenario.

A Mighty Fortress.  I'm sure that it will shock everyone to find out that I was utterly captivated by a game depicting Sixteenth Century warfare.  It was completely Machiavellian, dealt with units that I'd never heard of before, and was a pleasant change of pace from the joys of 81mm mortars.  Nice though they are.  This game was nominated for all sorts of gaming prizes - probably because it was more than just me that liked a change from the Eastern Front.

Diplomacy.  This one was cool, because the military "battles" were even less intricate than what you saw in Risk.  Negotiations and treachery were everything, with deals cut in (non) smoke filled rooms (c'mon, we were 14 or so), and shifting alliances all nominally based on World War I.  What was particularly interesting to 14 year old Borepatch is that up to seven people could play (there's not so much negotiating when there are only two players) and some of them were girls!  Mom and Dad must have breathed a sigh of relief.

It was also when I found that girls could be even more treacherous than boys.  Kind of opened my eyes, there.

But if you really wanted to get the chicks over to Game Night (and let's face it, who doesn't?), nothing beats Cosmic Encounter.  And I mean nothing.  Nominally Science Fictionish, it was a battle between alien races for Galactic Domination.  Rules were simple, each "race" had a Special Power (that let them cheat in particular ways), and games only took 15 minutes.  This came out when I was in college and winding down from the more hard core military gaming, but this would come out all the time at parties.  The chicks would dig it, which meant that we would dig it even more.  We ended up getting most of the expansion packs.

There are more, but these were the highlights.  Honorable Mention goes to Sniper (WWII urban combat) where I developed a taste for rifle grenades.  You had to set up two teams, a rifle grenade fire team and an assault team, and time the attack very well.  But if you did that, it didn't matter that you were playing as the Russians with Mosins against the Germans with MP40s.  But after a while, nobody wanted to play ...

And of course we played Dungeons and Dragons, but that's not very interesting.  Pretty much everyone played D&D.  The only thing that's interesting was that I started in 1974.

So thanks, Stretch, for a waltz down memory lane.

Yes, I am a nerd.
Posted by Borepatch

Labels: i am a nerd

You know, a modern take on those intrigue games would be Europa Universalis. My freind the history major is always telling me about how he struck a deal with the King of Spain to take out the Prussians, or somesuch.

You have to have someone/some-people with whom you play these games, right...? I always enjoyed looking at the the cover artwork in the Hobby Shop, and wondered what it would be like.

BTDT - but Afrika Corps started me off and I did own War in the Pacific. All 12 or so maps of it....

My first wargame was PanzerBlitz in 1976-77 timeframe. I also had a subscription to S&T (which was bi-monthly, if I recall). Learned about some historical periods I wouldn't have otherwise. Would love to do some Panzer Grenadier sometime -- in some ways the successor to PanzerBlitz. I have the two North Africa sets for it.

Still got the Avalon Hill Starship Troopers, just like Squad Leader but with Bugs.

I remember a nifty little board game called Warp War.

NMM1AFan, I really enjoyed Warp War. I may even have it somewhere in a box in the attic.

Oh, how I loved those old war games. I've still got a number of them in my storage shed.

I started out with Tactics II and then Jutland with its little cardboard range sticks and angle of fire gauges.

Panzer Blitz was a great game. I loved the T-34s.

My all-time favorites were the Fleet series from Victory Games, even though many a time American carrier planes pounded my poor, little Russian squadron under the waves.

Instead of Strategy I, I played AH's Blitzkrieg. Not as variable as S1.

Much of my wargaming migrated to miniatures rules, played with cardboard proxies 'cause I didn't have the patience to paint.

And on Warp War, if you do some searching you can find a print-and-play version with rules out there on the Internets.

Over the course of several moves, I lost all my board games, figuring I'd never play them again...

One day, around '02 or '03, I decided that I would use the magic of Ebay to repurchase my youth.

You do not EVEN want to know what unpunched copies of some of the classics from AH,SPI, and GDW are fetching these days.

I have real military bolt-action rifles that cost less than I paid for a copy of Fifth Frontier War...

Now I need to go look in my basement to see if I have any unpunched old S&T games. #1 Son's tuition keeps coming up ...