Mom brought the Albuquerque Journal newspaper for me, because it had an article that she knew that I'd want to read.  The Last Codetalker:


With gnarled fingers, Chester Nez reverently opened the small box that his son Mike had fetched for him at their West Mesa  home.  Even at 90 years old, Nez's face still beams as he proudly opens it.

Careful not to tough the gold medal, Nez shares a secret.

"On the other side it says, 'We used out language to defeat the enemy,' and that's what we did," he said.

The CodeTalkers, of course, were Navajo indians that joined the Marine Corps in World War II.  They used a code based on the Navajo language to send undecipherable radio messages in combat, acting as human encryption machines.  They were so much superior to the mechanical and code-book ciphers of the time that they often missed R&R deployment, because everyone insisted on having them.

The reason, of course, is that when the mortars are landing around you, nobody wants to wait ten minutes for the radio man to cipher the call for artillery support.  Especially when an error made transcribing the code (not unbelievable under combat conditions) might make the entire message undecipherable, and would require a retransmission.  Get a Code Talker on the radio, and if there's a problem he'll just say it again.  Incoming fire support in 15 seconds, not 15 minutes.

The code was so important - saving so many Marine lives - that it wasn't declassified until 1968.

There were 29 original Code Talkers, from the first class where they learned radio operations and developed the code.  It was based on Navajo words, but wasn't Navajo, so it was essentially undecipherable by the Japanese.  As far as we know, they never broke the code.

Of the 29, Chester Nez is the only one left today.  I met him once, in Old Town Albuquerque, at a book signing.  He and the few remaining of his fellow warriors wrote their memoirs together: Navajo Weapon.  I was fortunately to get him and his fellow heros to autograph my copy; they were doing it as a fund raiser to help with their health care costs - to the shame of the Veteran's Administration. 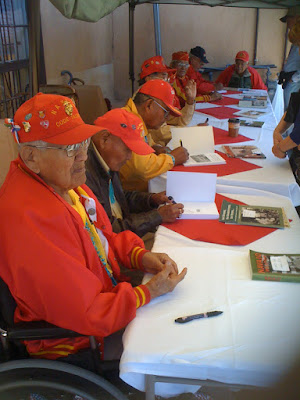 Of the original group, Nez is the only one left.  The Albuquerque Journal did a simply superb job telling his story.  It is, in fact, exactly what journalism should be about: local stories that tell us about ourselves, that nobody else can afford to tell.

You'll notice that I don't link to their outstanding story by Charles D. Brunt.  The reason is that the link (which you can search for - please use Bing instead of Google) takes you to a paywall.  I think there's a free registration, but you'll have to want to jump through their hoops to read Chester Nez's story.  And that's a damn shame.  That's a story worth reading, well told.

Cpl. Nez, thank you for your service to this Country in its moment of need.  You and your fellows are an inspiration from a nobler day, when the citizens of this Republic did not hesitate to stand up for that Republic.  Unashamed to defend a common community.

Most have now gone onwards, where we all some day will follow.  Only Cpl. Nez remains to guide us towards his comrades.

It has become beauty again.

Terrific patriots all! Twenty years plus ago, there were a couple Code Talkers who mall-walked near where I worked. I'd sometimes see them on my lunch hour. They wore their American Legion hats.
I'd always make a point of thanking them for their service.
Thank you for writing about the remaining one.

Even among the Marine Corps, a few deserve special notice. Among those, the codetalkers rank high.

Amazing men, and an amazing story.

Do you think it would ever occur to a congress critter of some stripe to maybe not spend millions on a turtle crossing tunnel and help a veteran? It's not just that we spend too much money, we spend it on the wrong (insane) things.

I suppose I'm asking too much...