The speech that Arizona Governor Jan Brewster should - but won't - give

In a more vigorous, and less degraded age of this Republic, we might have expected something like this:

I address you tonight to explain why I am vetoing the legislature's latest bill, banning public gatherings within 300 feet of funerals.  I understand that emotions are running very high after the senseless shootings in Tucson.  I understand that the group that has announced its despicable plans to protest outside the funeral of a 9 year old victim has further inflamed the situation.

It restricts the government especially when we see these as offensive.

We can look on the Constitution as merely a piece of paper, or we can look on it as something real, that binds us with well thought out restrictions devised by wise men long ago.  Men who saw that evil seduces us to act, by appealing to our better natures.  These men had seen the results of that evil - evil done with the best of intentions - and bound our government with chains as mighty as they could craft, to prevent that evil from establishing itself on our shores.

While I agree with the sentiments that moved the Legislature - agree with all my heart - I will not bring that evil to these shores.  This government will not violate the Founder's sacred intent, and prevent the people from assembling.  Nor will it prevent what I personally believe to be a contemptible church from spreading its message of hate, in the course of exercising its understanding of its religion.

I therefore veto the Legislature's well-intended statute, because it does violence to the Constitution.

I encourage all Arizonans to exercise their rights of assembly and speech as well, especially in Tucson, and especially at this little girl's funeral.  Those rights are equally precious, and protected by that same Constitution.  As it has often been said, "The First Amendment protects you from the Government, not from me."

I've spoken with the head of the State Police, and with the Tucson Chief of Police, and by a strange coincidence both the State Police and the Tucson police are busy that day, and will not be in attendance at the funeral.  I do ask all Arizonans to exercise their good judgment, and consider whether it would be wise to bring firearms.

Thank you, God bless you, and God bless this great state.

The situation would almost certainly be addressed peacefully, since the Westboro Baptist Church members, while contemptible, are likely rational.  It's almost certain that they lack the courage of their convictions.

But it's possible that the Good Citizens of Tucson might have the opportunity to mete out justice.  It's happened before here, and still occurs:


The older man - measured, polite - had decided it was time the world was told why a man should be abducted, tied to a lamppost and have boiling tar poured over his head and body before being 'decorated' with feathers.

"This man had been warned," he says. "This man was known to have been dealing drugs in our community. If you have kids rolling through the doors with their eyes all over their heads, you know that something is not right.

"It doesn't take Sherlock Holmes to work it out. Selling drugs to children is not on. The community wants drug dealers off the street, but they have no confidence in the police. If police catch these people dealing, they don't do anything. 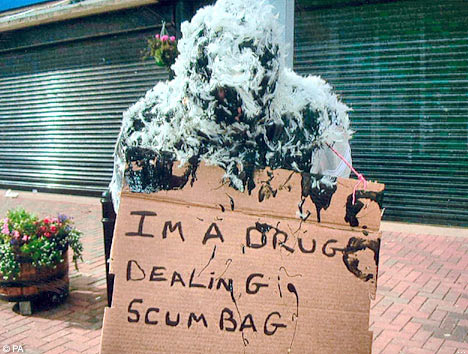 The Constitution binds our government with mighty cords, restraining its acts.  The Government should be bound with these cords, to protect the People.

But the Government needs to be wise enough to know when to step aside to let the People do what it should not.

Via The Other McCain.
Posted by Borepatch

Even acknowledging that it is the Daily Mail writing that article, I find their upper-crust, "It can't be happening here!" rather ... nauseating.

"one of the most shocking acts of violence and public humiliation since the Troubles ended."

If that's the best you can come up with for violence and public humiliation, you're in pretty good shape... And considering the government-published statistics indicate that one adult in seven were victims of at least one crime in a twelve-month period ... I think they've got a lot more to worry about than "publicly humiliating" a known drug dealer.

Lesson: if the police refuse to do their job someone will.

"But there's no danger of us dealing drugs on the streets," said one man in his 20s,

Wow, I think that says way too much about the state of law enforcement in the U.K.

Short form: how dare the paper be horribly outraged about vigilante justice when any adult has a one in seven chance of being the victim of a crime in any given year, and the police aren't doing their jobs?

When "The System" fails citizens impose one that will.
It's not pretty.
It's not flawless.
And The System will fight back but to no avail.
We will see more of this through out the Western World. You know this. I know this. The usual suspects are and will remain in denial.
Pardon, I had an extra helping of Bummer Flakes this morning.