Good on ya, cobber


AN SAS digger has become the most highly decorated member of the Australian Defence Force after being awarded the Victoria Cross for conspicuous gallantry shown while attacking Taliban machine gun positions in Afghanistan.

At almost 6 foot 8 inches and dishy, he'd be a catch for my lady readers even without all the excessive-heroism-under-fire thing:


As Corporal Roberts-Smith headed toward a small building that provided some cover, he saw an insurgent ready to engage his patrol so instantly shot him dead at point-blank range.

He then showed his own position to the insurgent machine gunners to draw fire away from his patrol, enabling his patrol commander to throw a grenade and silence one of the guns.

"Seizing the advantage, and demonstrating extreme devotion to duty and the most conspicuous gallantry, Corporal Roberts-Smith, with a total disregard for his own safety, stormed the enemy position, killing the two remaining machine gunners," the citation reads.

Alas for my lady readers, he is a hapily married father of two: 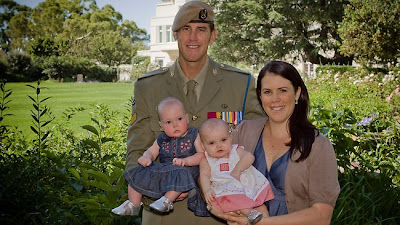 Congratulations, Cpl. Roberts-Smith.  It's men such as you who remind us of the ties between your land and mine.  I'm proud to shake your hand, Digger.

Via Theo Spark and Stormbringer.
Posted by Borepatch

I remember that song. There's still something wrong with it, 'cause it makes my eyes leak.

Man enough to do, and good enough at it to survive.. Well done, that man.