"He was one hell of a guy, one of the greatest soldiers I was ever under," said Heffron, who had the nickname "Babe" in the company. "He was a wonderful officer, a wonderful leader. He had what you needed, guts and brains."

Winters, of course, was the leader of E Company, 506th Parachute Infantry Regiment in World War II highlighted in Stephen Ambrose's Band Of Brothers, and the H.B.O. series of the same name.

What is most remarkable about his memoir Beyond Band Of Brothers is his repeated expressions of regret that when he had a particularly tough mission, he would rely on First Platoon for the toughest fighting.  They were his most experienced men, but he said over and over again that too many of them lost their lives because of his decision to do that.

Winters always seemed uncomfortable with the public spotlight from Ambrose's book and the HBO series.  He was matter of fact, and always careful to give credit to his men; he stepped out of the public eye five years ago.  I was particularly touched by this from his obituary:


An intensely private and humble man, Winters had asked that news of his death be withheld until after his funeral, Jackson said.

He expressed a concern for family and friends around him until the very end.  Humble indeed, and leading by example, from the front.


A brave captain is as a root, out of which, as branches, the courage of his soldiers doth spring. 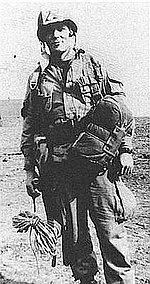