We're going to see Camp Borepatch, so we're kind of busy.  But these are worth your click.

Foseti shows us what's wrong with policing in the UK, and how that (logically) leads to their current breakdown in law and order:


The cop has spent an entire shift dealing with two "crimes" that have both been "solved." The result is that a lot of paperwork has been completed. The important thing is that no one has been treated in a racist manner.

The reality that emerges from the pages of the book is that modern police are basically social workers for the underclass. If you want to know why crime is up, it’s because police aren’t on the streets anymore. Instead, they’re filling out paperwork or looking for a kid whose mother is too lazy to turn off the TV and be a parent (and why should she miss her stories, if she doesn’t know where her kid is, she can just call the police).

The police also spend an inordinate amount of time documenting the fact that they’re not racist. After all, increases in the level of crime won’t get any of them fired, but an accusation or two of racism that they can’t refute could result in someone losing their pension

Businesses know that incentive programs are very tricky, because employees respond to the letter, rather than the spirit of the incentive.  There's a lot more there, and I can't argue with any of it.  RTWT.

A couple days ago, ASM826 linked to the recipe for Whiskey Fried Porkchops he fixed us for dinner.  Let me just add my recommendation to his - these are absolutely delicious.  They also look like they're just about impossible to dry out, as is so often the case with porkchops.  The only change I'd suggest is call this a braise, rather than frying.  Or maybe call them a BBQ fricassee.  But you really should try these out.  Kudos to Eyes Never Closed for posting this - a grateful Intarwebz thanks you.

Speaking of ASM826, he offers a haiku for a pistol match.  It reminds me of a haiku I posted in the early days of this blog.  We had the New England blogshoot coming up, and I had prepared some reactive targets.  I reproduce it here, thanks to the magic of cut-and-paste: 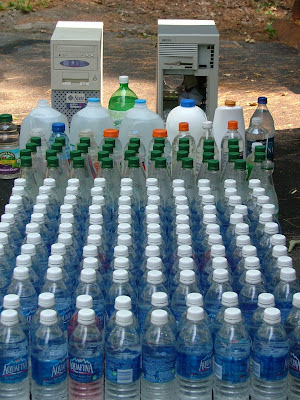 I can haz NEA grant?

And yes, that is a Sun workstation in the rear ranks.
Posted by Borepatch

Y'know, some of those full water bottles are still sittin' down by the range...

The other one looks like an old HPUX workstation. In their day, those two systems cost more than a lot of the people who used them made in a year. Now, they're target stands.

Hmmm . . . I might have to try that pork chop recipe. You know I've always struggled with pig chops :)

Thanks for the kind words about my recipe - ASM826 looks like he did a fine job with it!