"One more such victory, and we shall be undone." 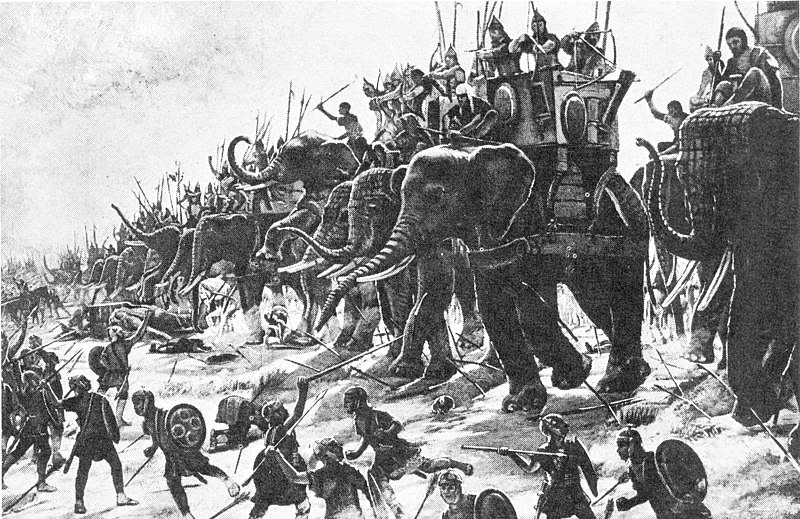 It was the second day of a hard-fought battle.  The Italian city-states of Magna Graecia had invited the great king, Pyrrhus of Epirus - master of the Phalanx and cousin to Alexander the Great himself - to join them in their struggle against the up and coming Romans.

Even in 279 B.C. the Romans fielded a fearsome army.  The first day saw the legions under Consul Publius Decius Mus break Pyrrhus' lines and attack all the way into his camp.  Only a quick counter-attack by his elite cavalry saved the day from disaster.  But the second day saw the weary Legionaries face a charge from Pyrrhus' war elephants.  Worn out from the punishing battle, their lines cracked, and Pyrrhus was left victorious on the field of Asculum.

Plutarch tells us that when Pyrrhus was congratulated on his bloody victory, we remarked that another similar victory would be the end of him.  Indeed, Pyrrhus is best known for the term pyrrhic victory - one that comes at a ruinous cost.  His army was never the same, and as Rome raised another army for the next year's campaign, Pyrrhus sailed away from Italy for good.

People are remarking on the unexpected victory for the Massachusetts Democratic Party, which pretty well swept the board in a strongly anti-incumbent election year.  Machine Politics ruled the day, and the Democratic phalanx broke the legions of the upstart Tea Party.  The same happened in Nevada, where the despised Harry Reid comfortably won re-election.

Surely, say some, these victories give the lie to the Tea Party momentum.

I don't think so.  These victories came at a terrible cost to the Democrats.  In what is perhaps the bluest of the Blue States, the Democrats had to spend something like $10M to keep their seats.  This is money that the national Democratic Party thought would go to other, less secure seats.  I haven't seen the numbers for Nevada, but it is likely similar.  GOTV as done by the Democrats is ruinously expensive.

And the Tea Party - like the Romans of 279 B.C. were new to the stage.  It wasn't the seasoned army of Julius Caesar, it was still green and learning the ropes.  Soon it swept the great powers of the day before it like chaff before the wind.

Imagine the Tea Party in 2 or 3 election cycles, with experienced NCOs command fresh Legions.  But it's worse for the Democrats.  Blogfather JayG writes about the reaction of the liberal, liberal Massachusetts press to Barney Frank's uncouth victory speech:


Sure, you might be tempted to dismiss this as the words of a journalist defending her paper. Frank's speech was positively blistering towards the Herald - I mean, after all, they dared to call him on his most egregious lies. But - and I'll delve a little into MA inside baseball - Margery Eagan is akin to Maureen Dowd as far as being an unapologetic lefty shill. There isn't a left-leaning politician she doesn't support, a right wing cariacture she doesn't paint, or a progressive shibboleth she doesn't cling to. When you've lost Margery Eagan - in Massachusetts - look out.

One more such victory speech, and we shall be undone.

Barney doesn't like how the game is playing out, even though he won.  The Dinosaurs sniff a change on the breeze, and roar their defiance.
Posted by Borepatch

And while it's true that the Tea Party candidates didn't win the Senate, neither did Carly Fiorina nor Linda McMahon. Both of them were main stream Republicans. Oh, and the Tea Party was responsible for Rand Paul, who won in KY. And many of the newly elected Congressmen.

Oh and I forgot to add that Murkowski didn't win in AK yet. And even if she does, it's a Republican hold not a Democrat pick up.