ASM826 emails to point out a simply gob-smacking article on Global Warming:


It is not hyperbole to suggest that the Republican mid-term victories spell doom for the Planet. As outlined below,  leading climate scientists say that major per capita GHG polluters like the US, Australia and Canada  must act urgently within the next decade in order to avoid disaster for Humanity and the Biosphere.

Denial of the World War 2 Jewish Holocaust (5-6 million killed, 1 in 6 dying from imposed deprivation) is a criminal offence in various Western European countries. Similarly, denial of the looming Climate Holocaust and Climate Genocide (potentially 10 billion avoidable deaths this century due to unaddressed man-made climate change) must attract social disapprobation. Free speech and scholarly research considerations would contraindicate custodial punishment of climate change denialism and its inherent climate holocaust denial – and indeed other holocaust denial and genocide denial. However a fitting punishment of any holocaust deniers would be the ignominy of exposure by authoritative, transparent, expert and public judicial process. However where such denial is not through ignorance and stupidity but knowing, corporate deception for illegitimate profit then stronger action is required. Dr James Hansen (NASA) has suggested criminal prosecution of CEOs who knowingly lie about the potential damage by man-made climate change should be subject to criminal prosecution in relation to such harm: “In my opinion, these CEOs should be tried for high crimes against humanity and nature." I agree.

Emphasis mine.  It's all there: comparing skeptics to Holocaust deniers, the don't-worry-be-happy ignorance that alternative energy sources cost five times what coal does, the over-politicizing of the issue (including discussion of criminal prosecution).  If you read the rest, you'll find more: a wildly unrealistic CO2 goal that not even the Kyoto Protocols attempted, the complete ignoring of China's blatant refusal to participate in these limits, and an extensive list of scientific organizations supporting CO2 controls - but no discussion at all of those organization's refusal to discuss the uncertainty of the calculations.

What's most interesting is that the MSM seems to be taking the opposite approach.  While they, too used to be in full shrieking panic mode, now you are seeing a much more balanced presentation of the issues:


What the Green Movement Got Wrong: Greens come to see the error of their ways

For many years, [UK] Channel 4 would not have dared devote an hour to the errors of environmentalism, writes Charles Moore.

Perhaps the most interesting thing about this programme is that it was made at all. It shows how the Green monolith has cracked. For many years, Channel 4 would not have dared devote an hour to the errors of environmentalism; or, if it had done so, it would have wrapped it in the cordon sanitaire always put round anything considered Right-wing, stating that this was a "provocative" and "personal" view.

This was no such programme. Instead, it was a platform for every sinner that repenteth. Former hippy Greens, directors of Greenpeace, the chairmen of the Copenhagen Climate Council and the like, queued up to admit error.

This is a very interesting article, which explicitly states that the green movement has come to recognize that they are seen as anti-human (promoting policies seen as causing widespread death and poverty), as continually engaged in wild exaggeration, and as making poor policy choices ("No Nukes" vs. "Lower CO2"). 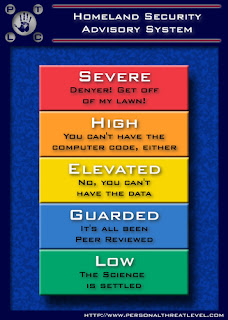 What a change a year makes.  12 months ago, the ClimateGate scandal had not yet broken, and the world seemed poised on a triumphant climate treaty at Copenhagen.  Then it all changed, and by January the dream was gone.  We still see that some Dinosaurs haven't gotten the memo yet, and think that they can stampede the public with ZOMG Thermageddon cranked up to 11.

But what's different now is that they're a laughing stock, and even their allies at Greenpeace are walking themselves back off the ledge as quickly as their Birkenstocks will let them.  The Greens see that they've squandered the public's trust.  The truly interesting question is how long it will take for them to get it back.  Or if they can at all.
Posted by Borepatch

We can only hope that a healthy amount of skepticism permeates all layers of science and politics.

The little bit they truly can't help but say and inserted, the game-giving Socialist "tell" is the blather about, "corporate deception for illegitimate profit."
They just can't help it can they? And yet being economic illiterates and number-crunching numb-nuts where 2+2=5, it doesn't stop them from expostulating on all things economic and numerical.

How come no one compares methan levels rather thn CO2 levels? Methane i9s a far more effective greenhouse gas, and is produced by nearly every mammal and many other species, as well as from rotting vegetation.

Yet we ignore the methane levels, and concentrate on CO2. Why?

Anyway the global warming issue won't go away. The politiciants in the US are not reacting aggressive enough on this matter. Actions taken are to weak....

Another problem which the Climate Weenie community has is that they seem strangely clueless about the internet.

They still feel that they hold the monopoly on knowledge; if you're not one of them (the anointed priesthood) you can't say anything. They neglect that what they're doing isn't so exotic that a well-educated physicist, engineer or just a good software hacker, can't understand the issues and see through them. A simple inquiry by a financial guy (McIntyre) started the whole thing unraveling.

When information is openly available that contradicts essential parts of their models, they just pretend it's not there. As if it won't go around the world at the speed of light. Instead, they just get more strident and desperate sounding.

A sure clue that climate "science" is fraud is that if they really thought their methods and data were beyond reproach, they'd be happy to show them off. They'd be proud of it, instead of threatening anyone who asked.

So, caught in the trap of their own making, they decide to double down...