I'd say "Exceeds Expectations", but everyone is the known universe has already talked about how great this film is.  Everybody's right.

Red is a "CIA Romantic Comedy", like the earlier Mr. and Mrs. Smith.  Like that film, it's a fun romp with lots of 'splody things and shooty things; like it, the plot is fairly predictable; like it, the over-the-top nature of the scenes is part of the whole charm.  Seriously, shooting a RPG?  You have to check your disbelief at the door, but once you do, the film delivers full entertainment value for your $12 theater admission.

What stands out about Red is Bruce Willis' performance, which can actually be described as subtle and nuanced.  As the central character, the entire film would stand or fall on his performance - too overly dramatic and it all would have fallen apart.

As I said, everyone has already raved about the film, and about how good Bruce is in it.  Everyone's right.  I'm not sure that this is his greatest performance, but I'm not sure that it isn't.  His script was written with few words, and so his face had to do most of his "dialog".  It's pretty impressive how he handled that challenge.

The supporting cast is also outstanding.  Morgan Freeman is, well, Morgan Freeman.  In this role, he gets to play the definitive example of the saying that "Old men need to be dangerous".  John Maklovich is outstanding as the crazy ex-CIA agent whose brain was fried by covert LSD experiments.  And Helen Mirren adds a touch of class, particularly when firing Ma Deuce in an evening gown: 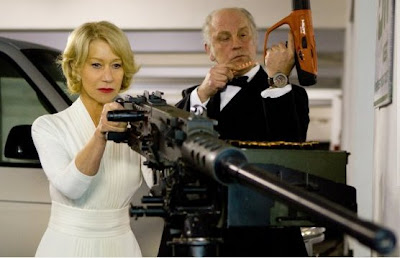 One thing that stood out, from both the film and the previews before it started, is how it seems that revolvers are making a comeback in Hollywood.  As someone who has a mini love affair with wheelguns, this is A Very Good Thing indeed.

This perhaps isn't great art, but it is great entertainment.
Posted by Borepatch

And speaking of revolvers in Hollywood, have you seen the reviews for Faster? I'm looking forward to that one.

I've got to go see that when I finally get home. Thanks.

Bruce Willis and a revolver?

Got it right here: