Exhibit A in the case of the People v. the TSA:


Carteach0 brings the video.  Who are you going to believe, Janet Napolitano, or your lying eyes?

Exhibit B in the case of the People v. the TSA:


Popehat brings the case for the venal, corrupting influence of power on the employees of the TSA.  He has links.  Man, does he have links.

Exhibit C in the case of the People v. the TSA:


My own prior post shows the futility of the TSA's actions, from a theoretical security point of view.

Exhibit D in the case of the People v. the TSA: 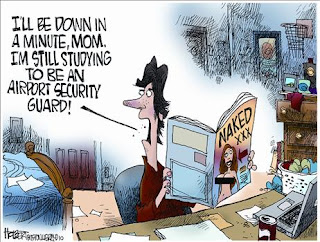 I believe that there is so much material to be presented showing TSA abuses, and such a small demonstrable payoff by their efforts, that it's inevitable that we will see hostile Congressional hearings soon.  Given the mood of the electorate - keep your hands off my money and my freedom - our shyster politicians will be looking for something to throw to the wolves.  Good.  An aggressive cost/benefit analysis will do some good in focusing scarce security resources on, you now, security problems.

The assignment for the rest of us is to call out Senators and Representatives, asking if they would subject their wives and daughters to the TSA assault, and if the answer is "yes", to demand proof.  And then publish their response - and let them know that you intend to do that.
Posted by Borepatch