Via Insty, it seems some Liberal Journalist (redundancy alert) is writing a book on gun owners. It seems that he went to AR15.com and posted a request to talk to gun owners who are "caching" weapons. Hilarity ensues: 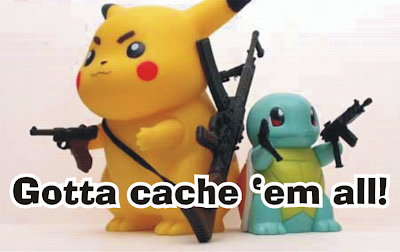 As you'd imagine, he was properly thrashed by the commenters (it really starts getting fun about 1:34 PM). He even - in a plea for civility, no less - calls the commenters d**kheads. Srlsy. Bug gun owners are nothing if not helpful, as this poster offered up:

Several years ago I stopped purchasing US Savings Bonds, to stop feeding the beast. I switched over to an auto deduction that is sent to my local FFL. Every two months he sells me a new AR-7 because of this entry in wikipedia:

The ArmaLite AR-7 Explorer, designed by Eugene Stoner, is the civilian-commercial version of a rifle developed for the US Air Force as a pilot and aircrew survival weapon. Its intended markets are backpackers and other recreational users as a knockabout utility rifle. AR-7 is often recommended by outdoor users of recreational vehicles (automobile, airplane or boat) who might have need for a weapon for foraging or defense in a wilderness emergency.

I then put it in a 6" PVC tube, with a threaded plug on one and and a glued cap on the other. I use a soldering iron and write, "Property of USGS - Do not disturb" on the capped end. I pour in some dessicant, stuff or roll in some poly tarp, add 50' of paracord, one Mountain House 2-serving Chicken Polynesian and a freeze-dried neopolitan ice cream, three us quarters, a $5 bill, and the previous two months of Playboy then bury them using a posthole digger under Interstate overpasses or in the exact center under high-voltage transmission lines. I am always very careful to save the plug of vegetation and put the dirt on a tarp, then replace the plug as neatly as possible.

I then return to my basement and log the location in the margin of a Bible.

Of course, people dig up his anti-gun background and put it on prominent display. If you need a laugh, from a proper, good old fashioned ass-whooping, this is your ticket.
Posted by Borepatch

You know, I might join AR15.com just to get in on this before the lock!

Seriously, Ahiodsohi's post hit it out of the park, did you see it?

It would help if he sent us the Bible. Otherwise, what's the point of burying them?

Some crafty idea with the AR-7s, right there.

I wondered about the two copies of Playboy then I realized that the man is a genius!

One - it dates the cache and acts as an indicator if any water leaks into the container. If you can't open the magazine because the pages are stuck together, then ... Oh! wait. Scratch the water leakage bit..(blushes furiously.

Two if any Muslims dig up the cache and see naked women who aren't their wives, then they have got to commit suicide or they don't go to Allahs perfumed garden and miss out on the 72 Virgins or something like that.

It's definitely a twofer ...