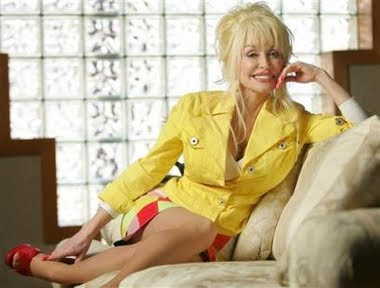 She's called the "Iron Butterfly" for her tough business negotiation, having turned down Elvis' (Elvis!) request to cover I will Always Love You. He wanted too much money - half of all royalties in perpetuity. She said no. Entertainer of the Year - one of only seven women who have ever been given this award. 45 Grammy nominations, 7 awards (she wuz robbed). Two Academy Award nominations. Ms. Magazine Woman of the Year. Country Music Hall of Fame, and Songwriter's Hall of Fame. A 2003 tribute album to her featured covers of her songs by Melissa Etheridge, Allison Kraus, Shania Twain, Norah Jones, and Sinead O'Connor. Yowzer.

Yet she says that the greatest honor she's received is a bronze statue on the Courthouse lawn in her hometown. She is, of course, Dolly Parton. Actually, that's Dr. Dolly Parton - she received an honorary degree for her decades of work to increase literacy. Eastern Tennessee had a real problem with that when she was born in 1946.

Through it all, she's kept her sense of humor. Famous (or infamous) for her showy outfits and huge wigs (among - ahem - other things), she has been known to say "It takes a lot of money to look this cheap."

Dolly Parton is, in some ways, the tap root of Country Music. Not a few of her 6000 (!) songs reach way, way back to Country's Scotch-Irish/Celtic foundation. While some of her songs are much more famous (9 to 5, I Will Always Love You), Her 2001 album Little Sparrow moved away from the heavily produced pop of the middle of her career. This is perhaps as close as we can get to a modern version of the Ur-Song; it's not hard to imagine something like this sung at Revivals or Mountain Medicine Shows, or around the fireplace a century or more ago.

American Idol had a "Song of Dolly Parton" night, with this performance of today's song:

Different, and more modern, but which still feels old. The tap root is still present.

But the sense of humor is always there. When Dolly was originally on the UK TV's Graham Norton Show, Graham was wearing quite a loud suit, for which he apologized. Without batting an eye, Dolly said Don't you worry yourself, my aunt had a sofa just like it. It was instant chemestry, and Norton and Parton became great friends, to the point where he recorded a version of Islands In The Stream with her at her theme park, Dollywood:

Bootnote: She's been married for almost fifty years to the same man - one who shuns the limelight, focusing his energies on her and his construction company. Well done, sir. So very, very well done.

"Little Sparrow" was great. Thanks for sharing.

I saw her chew up and spit a British talk show host. His "cute" comments to her, no doubt thinking she was the typical American hillbilly, drew her smiling ire.

Sharp as a tack, WoFat. But with manners.

We're huge Dolly fans, and that's part of it.

Whoa.
Never heard that one. I thought of DP as another pop/country type; I was way wrong on that, evidently.
This rings of bluegrass, which is country the way DT likes it...

Doubletrouble, that is why I liked the song so much. Dolly was "Country/Pop" until she became "Pop", but has really come back to the roots of country in the last 20 years. This song is almost timeless in its composition, its lyrics, and how she performs it. It literally is something that could have been sung - to commercial success - a hundred years ago.

She had a couple of bluegrass albums right in a row several years ago. Love 'em all. I've seen the bronze statue of her as a girl in downtown Sevierville, TN. She's done a LOT for the region, economically as well as created a book program for all county students. Great lady, great entertainer, IMO.