"Look around you. You’re not alone."

Why, there are thousands of you!

Remember the original definition of Bolshevik was "majority", and the term was adopted when they were in the minority. The Media says "thousands" turned out, rather than the "hundreds of thousands" who were there. They want you to think that you're Mensheviks.

This is why they hate Sarah Palin, who speaks - simply and plainly - the Truths That Must Not Be Spoken. They nitpick, because they won't address the important stuff.

UPDATE 28 August 2010 15:28: Case in point: of the first 5 updates in their "live reporting", four were negative (2 on counter protests, 1 on people being treated for heat exhaustion, and a quote from a union guy who didn't like the protest). Did they offer an estimate of crowd size? No. Did they report what the speakers said? No.

And this update is hilarious:

What are participants wearing?

There's a man in a Revolutionary War uniform and three-corner hat. There's a woman with what looks like a fighter jet tattooed to her upper right arm.

There are a number of tea party shirts and a man in a gray T-shirt that says "10th amendment -- our last hope for the preservation of freedom" -- with an "X" over an image of the Capitol dome.

Reporting on what the speaker said that got applause? No. But lots about the crowd's fashion sense. I guess that everyone in the Washington Post's newsroom was busy today, and so they sent a reporter from the "Style" section.

It reminds me of the dark joke from right after JFK's killer was shot in the Dallas Police Station:

Q. What did the Dallas Police Chief say when an elephant walked through the Squad Room?

A. Nothing. He didn't notice.

Or perhaps the mot juste is "malinformed". It would be nice if the MSM didn't continually live down to my expectations.

UPDATE 28 August 2010 15:43: The National Park Service estimate is north of 300,000 attendees. The crowd extended all the way from the Lincoln Memorial steps to the Washington Monument. Anyone who's ever walked that distance knows that's a long way. The MSM seems to be mostly missing in action. As I keep saying, the best evidence for media bias isn't what's misreported, but what isn't reported at all. And this might explain that:

If I were part of the liberal elite, I wouldn't be as worried by the historic/racial overtones of the rally. I'd be worried about what it symbolizes: A growing understanding on the part of regular Americans that they should (and need) no longer heed the supposed "wisdom" and "moral authority" of a liberal elite that has nothing but contempt for them.

Word. The Dinosaurs smell a change on the air - and hear the crowd noise, even over on 15th Street NW - and roar their defiance. 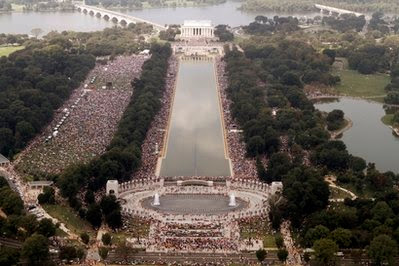 UPDATE 28 August 2010 22:45: The reason they're all going out of business is that they think we're stupid. Can't block the signal, dudes ...
Posted by Borepatch

Based on the pictures of the "million man march" there must have been fifty million people there today, if not more. I read CBS estimates 87,000. 500,000 wouldn't surprise me.

I watched the whole thing on CSPAN. After missing over a full week of work sick this month, I felt I couldn't take yesterday off to go up there, but a few friends were going. Last night's gathering at the Kennedy Center was worth watching, too.

The only thing even close to this that's popping up on my Google News is Al Sharpton's "Counter Demonstration," and they don't even mention this one.