The great satisfaction of blogging is the inter-connectedness that grows - links, comments, and people emailing you about posts are much nicer than traffic stats. Early this week, I posted about some color photos from the late 1930s. One of the photos in the exhibit (which I didn't post) was this one: 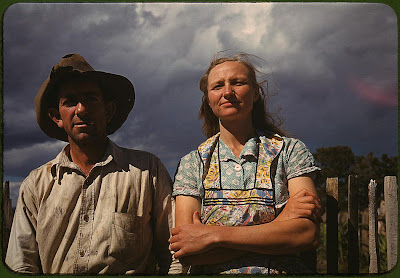 And then the inter-connectness of the Internet kicked in. I got an email from Dad, who as a history professor knows a thing or two about this subject. Specifically, the subjects in the photo:

The first photo in the batch you emailed me is of Faro and Doris Caudhill. They were the main family photographed by Russell Lee in the Pie Town of 1940. They lived in a combination dug out/log cabin on Hometeaded land. When World War II started, economic opportunities lay in places other than Pie Town. They still do, and Pie Town is truly in the middle of nowhere.

Faro and Doris moved to Albuquerque. Faro, a laborer, became business manager of the laborers union. Doris later said that men like wine, women, and song. She added that Faro didn't drink and he couldn't carry a tune. Guess what was left. Doris divorced him, and remarried. In 1993, she responded to the author of Women of New Mexico Depression Era Images that she had been photographed, too, and had written a memoir. Photographer Joan Myers followed up, interviewed Doris and used her memoir to write Pie Town Woman, the Hard Life and Good Times of a New Mexico Homesteader(University of New Mexico Press, 2001). The book accompanied an exhibition at the Albuquerque Museum, but Doris had died of cancer. I went to the opening, got the author to sign my copy of the book, and acted as a fly on the wall overhearing Doris's Albuquerque friends gossiping about Faro.

And so the Internet, working its magic across the miles.
Posted by Borepatch