On this day in 778, the army of Karl der Grosse (Charlemagne to you francophones) was crossing the Pyrenees back into Francia, when his rearguard was ambushed by a band of Basques. The rearguard fought hard to save the supply train, including the great king's personal possessions. 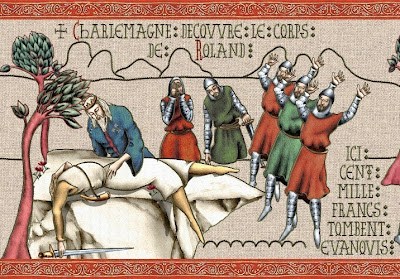 Many of them fell, including their leader Roland. The chronicles of Einhard tell the tale:

While he was vigorously pursuing the Saxon war, almost without a break, and after he had placed garrisons at selected points along the border, [Charles] marched into Spain [in 778] with as large a force as he could mount. His army passed through the Pyrenees and [Charles] received the surrender of all the towns and fortified places he encountered. He was returning [to Francia] with his army safe and intact, but high in the Pyrenees on that return trip he briefly experienced the Basques. That place is so thoroughly covered with thick forest that it is the perfect spot for an ambush. [Charles's] army was forced by the narrow terrain to proceed in a long line and [it was at that spot], high on the mountain, that the Basques set their ambush. [...] The Basques had the advantage in this skirmish because of the lightness of their weapons and the nature of the terrain, whereas the Franks were disadvantaged by the heaviness of their arms and the unevenness of the land. Eggihard, the overseer of the king's table, Anselm, the count of the palace, and Roland, the lord of the Breton March, along with many others died in that skirmish. But this deed could not be avenged at that time, because the enemy had so dispersed after the attack that there was no indication as to where they could be found.

It takes a tough man to be in the rear guard. You have to collect stragglers, deal with all the heavy supply wagons, and you're a magnet for raiders looking to score some quick booty. 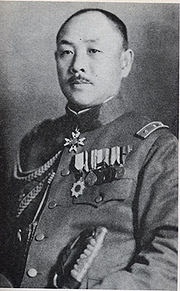 On this same day 1200 years later, a different leader had to deal with a different fanatical follower. Emperor Hirohito had decided that surrender to the Americans was the best way to preserve his people, after a terrible bombing campaign culminating in the two atomic bombs. He made a radio address to the Japanese people, and address that was very nearly thwarted by his most fanatical followers led by War Minister Korechika Anami. During the struggle, the head of the Imperial Guard was killed, but brave government officials hid the recording, which went off as scheduled.

Afterwards, Anami killed himself, his attempt to protect the Emperor (as he saw it) a failure. Another rearguard casualty.

It's very interesting to see how today a lot of people who have always thought of themselves as the Vanguard are fighting a desperate rearguard action, trying to "protect" people who neither need nor want that "protection", any more than Hirohito did.
Posted by Borepatch

The Basques are still raising hell and telling people to get off their lawn to this very day. It looks like with all this history underneath their belts, our leaders would have learned that the greatest standing army in the world is no match for a dedicated guerilla movement.

Betasheep, we very much enjoyed our vacation to the basque country - nice people, and very friendly (at least to this American).

But a thousand years or more of fighting is hard to get past. It looks like Europe is going through a healthy bout of Federalism, although it's called "devolution".

The Catalans would be another example.