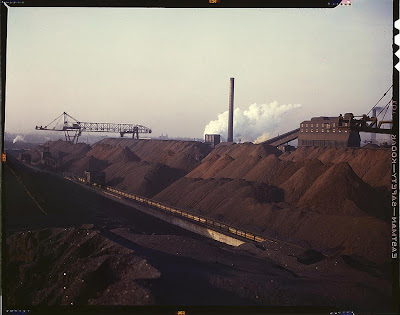 This is a world away from our current Intellectual Elite's ken, but it's not so very long before I was born. We used to think big, then - the train is dwarfed by the coal piles. Now the Elites make everyone file Environmental Impact Statements and ask approval. Now Detroit is withered:

The fall of Detroit is an objective observation. Most people (even on Fox News) do not really connect it with the history of the 20th century, the FDR administration, the tradition of progressive government, the Great Society, John Lindsay, etc, etc. In fact, they try not think about it at all. Why would they? Their history is made of cardboard. Red, white and blue cardboard. So the American TV audience has the choice of (a) the CAP version, which (IMHO) is entirely opaque and meaningless, or (b) brightly colored cardboard. This by itself is more than enough reason for rage.

The Intellectual Elite is incompetent, even by the standards they set for themselves. A reverse Midas touch, turning gold into lead.

The pictures at the link are incredible, color photographs from the late 1930s and early 1940s.
Posted by Borepatch

As for the photos, I spent an interesting afternoon browsing pictures by the Farm Security Administration through the LOC archives, some time ago. You're right, they are amazing.

How cool would it be to live someplace called "Pie Town" :)

Stunning; thanks for posting this.