Blogger has a hilarious feature called "Monetize4" (or it used to be called that - they change things around all the time). It's basically there to make it easy to turn on Google Blog Ads.

Now I don't run ads, because it might annoy some of y'all, and also because Blogger won't say how much it's worth. They're quite fishy here - you kind of have to turn it on and see what happens. No thanks.

But out of the blue comes an email asking me if I'd like to have an ad or link to The Sportsman's Guide. As I told them, I don't run ads. But their marketing department is clearly hitting center mass (err, or missing the target entirely) if they're pinging me - kind of cool, right there.

So those of you who live in the United States of America (as opposed to the People's Republic of Massachusetts) might want to check them out. 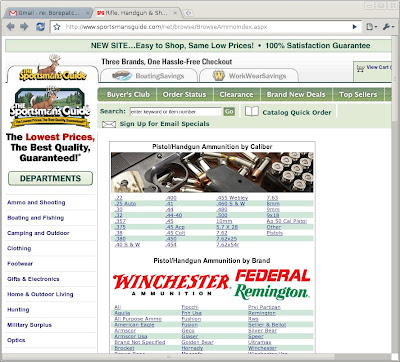 Full disclosure (for you, not for the FTC, who can kiss my tail end): I've never shopped with them, I haven't received any consideration for this, and I won't be changing my "no advertisements" policy. I just think it's cool that someone asked.
Posted by Borepatch

Labels: made of win, me me me

Back when I kept up my Blogger blog, the function earned me exactly one penny. After running Project Wonderful for a few months, I earned $5.

I've bought stuff from them and had to return stuff to them. Decent service, I suppose. I hear that they are starting to be a pain to order gun stuff from, but that is probably just gun forum hearsay.

In my experience their military surplus stuff is seriously lacking quality, but again that may be the nature of the stuff I bought.

Yeah, I got the same emails. Seems like a nice guy, and I've bought from the sportsmans guide, but not directly only through Amazon Marketplace, an here's why:


For every positive experiences I've heard from my friends and colleagues, I've heard three negatives.

I've had good luck with ammo orders from them but my last one WAS a while ago. I'm overdue for another and I thought of them first.

Thumbs up, for the most part, for Sportsmans Guide here. I've ordered quite a bit of stuff from them over the years. Most of it was very good, with a few clunkers scatttered about. Usually I can avoid the duds by doing a little online research first.

Worst thing I ever bought was a 5 pack of surplus, new in package, OD Green rain ponchos. They looked great and were very inexpensive, but when we actually used them during a storm at an outdoor concert - they leaked like a sieve and we got soaked :)

I got the email request too - and have a similar lack of commercial interest - I also agreed to it but haven't yet done anything about it - I have my own lazy-man's timetabble.