Chet Atkins - Birth of the Blues (with Les Paul) 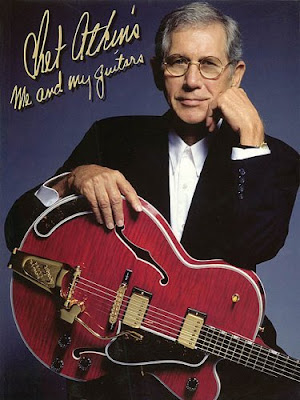 Chet Atkins needs no introduction here - not only one of the greatest guitar players of all time, but a great record producer as well. As a recording executive, he was instrumental in establishing the "Nashville Sound" and launching the careers of Waylon Jennings, Willie Nelson, Dolly Parton, and Charlie Pride.

But he's most remembered for his stunning virtuoso guitar. His signature "show off" number was "Yankee Doodle Dixie", where he'd play "Yankee Doodle" on the low E string at the same time he's play "Dixie" on this high E string.

"That ain't nothing," he'd say. "I know a guy who can do that and sing the 'Star Spangled Banner', too."

Nine times CMA Instrumentalist of the Year, 14 Grammys, Country Music Hall of Fame and Rock and Roll Hall of Fame, White House performances for every president from Kennedy to George H.W. Bush, he also maintained his HAM radio license (WA4CZD).

No lyrics today, just a set of very different songs to show the breadth of his talent.

I enjoyed watching these.

Thanks.
Nice.
Have to show my guitar playing son these.

Of course Chet is not "shredding" which sounds like angry caterwauling cats araound here..