The key to (Climate) science

Richard Feynman was one of the great scientists of our day, receiving the Nobel Prize in Physics for his work on Quantum Mechanics. This lecture was recorded around the time of that award (1965):

Feynman was not just a great theoretician, he was a great experimentalist. Notice how in this clip he starts with theory, and ends with experiment. The data don't lie. He did this on national TV in the aftermath of the space shuttle Challenger explosion:

To Feynman, the data, and observations, don't lie. He only thought that because he didn't work in the field of climate science:

I read the excellent and interesting guest post by Marc Hendrickx about the IPCC and the Himalayas. My first big surprise was the size of the claimed warming. He cites IPCC Table 10.2 which says:

What do the data say? Fortunately, this didn't come from Michael Mann (of "hockey stick" fame), or the Climate Research Unit of the University of East Anglia (of "the dog ate my data" fame). It comes from NASA's GISS database. If you look at the data, what do you see? Well, it depends. There's "raw" data (the temperature that was read from the thermometer), and there's the "adjusted" data (the temperature after the raw data has been "adjusted"): 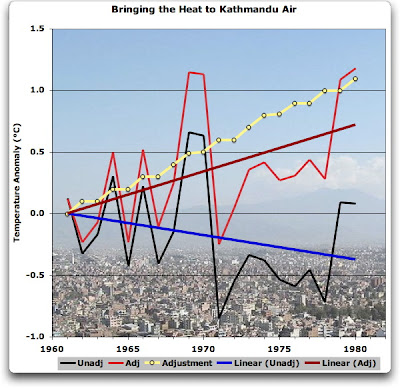 The raw data ( the blue line) shows a decrease of 0.4°C over 20 years. Once the data has been "homogenized" and whatever else, it shows an increase of 1.1°C (red line). The yearly adjustments increase each year. Whoa. Willis Eschenbach channels his inner Feynman:

They have changed a cooling trend to a strong warming trend … I’m sorry, but I see absolutely no scientific basis for that massive adjustment. I don’t care if it was done by a human using their best judgement, done by a computer algorithm utilizing comparison temperatures in India and China, or done by monkeys with typewriters. I don’t buy that adjustment, it is without scientific foundation or credible physical explanation.

At best that is shoddy quality control of an off-the-rails computer algorithm. At worst, the aforesaid monkeys were having a really bad hair day. Either way I say adjusting the Kathmandu temperature record in that manner has no scientific underpinnings at all.

If you think about my last post about software bugs and the importance of software Quality Assurance efforts, his statement about computer algorithms becomes pretty significant. If this was the problem then we have a non-scientific outcome due to a software problem.

Listen to Feynman again: If it disagrees with experiment [observation], it's wrong. This statement was highlighted by the IPCC, and seems terribly hard to square with, you know, science. This doesn't change, even with a constant IPCC drumbeat of doom-doom-doom.

And speaking of drums and Feynman, here he is playing his own beat of doom:

Mohawk on the Dartmouth said...

Another gaping hole in the global warming scam. We're lucky to have people like Feynmen who aren't afraid to call these guys out on their fear-mongering fiction.

I remember a tale of somebody working with BF Skinner, the behaviorial psychologist, reporting that an experiment had failed. The apprentice said the rat failed to behave as predicted. "No!" Skinner shouted. "The rat is right." Whatever the theory was, was wrong. The rat has his own reasons and behaviors, and the theorist's experiments are to confirm them. A failure is of the experiment, never the rat.