The Outlaws - Ghost Riders In The Sky 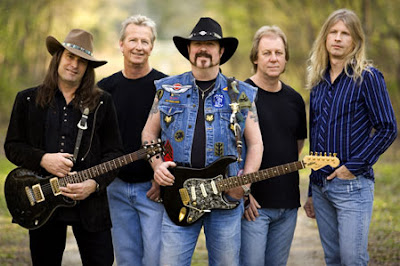 One of the great things about Country Music is that if you don't like a song, someone else is likely to cover it, and do it a really different way. I didn't care much for the song (although Johnny Cash's version on The Muppet Show was pretty funny). But everyone has done this song (really - including Bing Crosby), so I just had to keep looking until I found a version I liked.

The Outlaws are a Southern Rock band out of Tampa. Playing clubs and Honky Tonks, they were found by Lynyrd Skynyrd front man Ronnie Van Zant, who got Lynyrd Skynyrd's manager working with them. Rocking this song up, and adding some screaming guitar was just the ticket, taking it to #31 on the Billboard chart in 1980. The old, made new again.

I particularly like the opening classical guitar, and the distortion on the electric guitar throughout the song, which gives this version much more of a ghostly edge. And if the guitar solo at the end isn't in Guitar Hero, it's a crime. Southern Rock, baby!

Their faces gaunt, their eyes were blurred, their shirts all soaked with sweat
He's riding hard to catch that herd, but he ain't caught 'em yet
'Cause they've got to ride forever on that range up in the sky
On horses snorting fire
As they ride on hear their cry

As the riders loped on by him he heard one call his name
If you want to save your soul from Hell a-riding on our range
Then cowboy change your ways today or with us you will ride
Trying to catch the Devil's herd, across these endless skies

Sadly, The Outlaws' frontman Hughie Thomasson died of a heart attack in 2007. May he be making this sort of music with the Choir Invisible.

Saw the Outlaws a loooonngg time ago. Enjoyed listening to them and have one or two of their albums...yes albums...big vinyl disks with grooves in them. Need a turntable to play them...you know a turntable phongragh, record player...sigh....

I firmly approve of this.

I like the song, but not this version. Which I think was the point of your post. I do like the Marty Robbins version, as well as the original Gene Autry version.

According the highly authoritative Wikipedia, there are 50 different covers of this song.

I'll be posting the Marty Robbins one at my blog since I'm falling behind on other stuff do to you know what. :)

TOTWTYTR, that's why I said that one of the great things about Country Music is that if you don't like a song, someone else will do a cover that you like.

Seems to me I heard Frankie Lane sing this, when I was a kid. Yea many moons ago.

I said the same thing on TOT's blog: while I like Marty Robbins' version, this is the one that does it for me. Mainly because I've always liked The Outlaws.

Too bad about Hughie Thomasson, but I think you're right about his aiding the band from another plane...

What I would have liked is for the Outlaws to have done a complete version of the song. They left out the last stanza :(