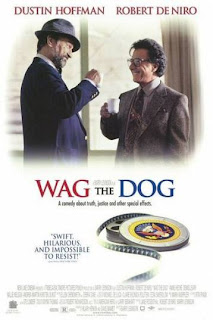 Wolfwalker left some comments on yesterday's post about bunker buster bombs being shipped to Diego Garcia. They made me wonder, what if Obama's serious? What would be his motivation?

Wag The Dog is a terribly fun - and terribly cynical - film from the Clinton years, about a President who manufactures a military crisis with Albania in the run-up to an election. Finding himself massively unpopular, he creates a crisis to rally the nation in the days before the election.

So, as a thought experiment, could this be a model for an October strike on Iran? Consider:
I certainly don't hold out any hope that Obama has principles that would get in the way.

So - take out the Iranian processing plants in October. It rallies the Jewish lobby, plus Centrist Democrats, plus (probably) a bunch of Independents. Of course, it infuriates the Netroots, but they aren't enough to turn disaster into victory anyway.

As the Mythbusters would say, "Plausible". Do I think it will play out this way? Probably not. But it's a thought experiment, remember?

Of course, this contradicts the Czar of Muscovy's analysis. All I can plead is that Israel taking out the reactors doesn't help Obama.
Posted by Borepatch

Obama is seen as soft on America's enemies, which by itself is not a major issue,

Also, as for shipping stuff over, let me know when the MOP and the B-2 show up over there.

Couple thoughts on this one, BP.

1. ANY type of military action by Øbama will absolutely INFURIATE his base - namely the loonie left. They elected him because they thought that he was going to close Gitmo and release all those pore suffering unfortunates to go frolic in the fields chasing butterflies. That he hasn't released them en masse is already a bone of contention; raw, naked, UNILATERAL aggression would not be tolerated.

2. Going after Iran would validate George Bush and the "Axis of Evil". Remember, they're still bringing up the spectre of Bush/Cheney/Halliburton, and going to the extraordinary length of striking at a sovereign nation would be tantamount to saying "You know that drooling chimp Bush? The one was accused of being a puppet war-mongering fool? Yeah, he was right about Iran, mkay?"

3. You assume that Øbama doesn't want America to have strong, dangerous enemies. I'm not so sure that's the case.

4. Barack Øbama refused to allow the American flag to be flown over the American military compound in Haiti because he didn't want it to be seen as an act of aggression. This is not the mindset that okays an all-out attack on a sovereign nation.

At the *VERY* best, Øbama might NOT introduce draconian sanctions on Israel for bombing Iran.

Jay, the one philosophy that I'm convinced the Obama subscribes to is "do what's good for Obama". If that means screw the netroots, I dont think he'd hesitate for a second.

An article written by Pat Buchanan. Take that as you will.

If you care--my reaction, which mimics what I said last night.

My friend the history major told me he wasn't worried, that Buchanan was stuck in a cold war mentality, and that time has moved on. I respect my friends opinion, but I am not convinced.

Mmm, I don't buy it. Long reply here turned into a post on MANP instead. Love the movie though. "There is no B-3 bomber, that's what I said."