Actually I'm not, but only because I thought to look at the soles of my feet after the last blogshoot. 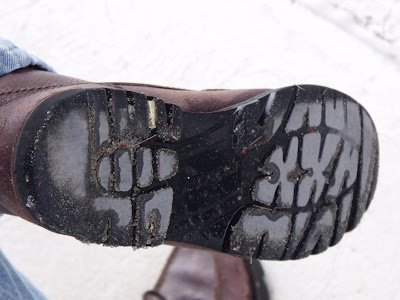 Picture stolen from Ambulance Driver, but I plead the following: (a) that is my boot with the empty .22LR case stuck in the tread, (b) I was the one who called everyone's attention to it, and couldn't (easily) take a photo standing on one leg, and (c) I'm fixin' to elaborate on the Massachusetts gun law situation.

In Massachusetts, anyone who does not have a valid Firearm ID (FID) card or License to Carry (LTC), and who possesses empty (expended) cartridge cases is in violation of Massachusetts General Law Chapter 269, Section 10(h)(1). This is a felony, punishable by not more than 2 years in prison or a fine not to exceed $500.

You know, the ones your kids might pick up at the end of a range trip, or the ones that might get stuck in the treads of your boots. These are dangerous, mkay, because I might kick someone to death with it. Or something.

To people who don't have any idea about firearms, it may seem "common sense" to require a FID or LTC to possess ammunition components. These people only think this because they have never taken their children to, or worn work boots on a trip to the range. In other words, their opinion is based on ignorance.

"Common Sense" gun laws - at least here in Massachusetts - are conspiring to make me a felon. So far, I've been alert enough to avoid this. So far.

It may be self incriminating to say that the next idiot I hear yammer about "common sense" gun control will get my ten-and-a-half up his backside. Minus the cartridge case, which I pulled out and left at the range. The kick in the pants is only a misdemeanor; the rimfire case in the boot is a felony.

UPDATE 8 March 2010 11:45: Welcome visitors from RobertaX. Thanks for the link, Roberta, and your post title beats mine!

It's not even a usable "ammunition component" at least with a center fire cartridge you can pop out the spent primer, re-size the brass and fill 'er back up again.

But a spent rimfire case is only valuable as scrap.

While IANL, it seems that the law as written does not distinguish between usable and unusable ammunition components, and so my fate would have rested on the discretion of Law Enforcement and the District Attorney. Somehow, that does not reassure me.

One could make a case for the anti-gun people being incredibly stupid for things like this. But another argument could be made that they know exactly what they are doing. It makes firearm ownership so risky that people are discouraged from owning them. I call it Huffman's Rule of Firearms Law.

Sort a reverse Hanlon's Razor applies to Gun Control laws: Never attribute to stupidity that which can adequately be explained by malice.
Posted by Borepatch

And yet you have poor gun laws according to the brady bunch.

I dumped all the range brass and a 30 round magazine in your spare tire well.

Hi Borepatch! You need to move to the United States!

I had a similar take as well.

Gotta be careful with that .22LR brass. You could, uh, put an eye out?

Common sense would be to move to another state.

It's not even a usable "ammunition component" at least with a center fire cartridge you can pop out the spent primer, re-size the brass and fill 'er back up again.

But a spent rimfire case is only valuable as scrap.

Weer'd, that's a great catch. There's nothing that case can do except go into the scrap bin. Other than try to make me a felon, of course.

FYI for "Huffman's Law" I think that's been the going rate for gun control laws in recent years. I mean how can you explain the "Assault Weapons Ban"? What was the point in banning bayonet lugs and flash hiders, or extended pistol grips? There is no added danger or threat from such a firearm, but it DOES make buying and owning guns a bit more difficult. Same with all these "Ammunition Encoding" or "Microstamping" laws, or "ballistic Fingerprinting", "Universal registration", recently people are talking at lot on lead ammo bans, and "Smart Guns".

Do any of these things accomplish ANYTHING? Sure they make it harder to buy and/or own a gun. Anything else? Nope!

But now with Heller, and likely McDonald, the Anti-Gun forces will find their end-game of banning all guns impossible, so instead they'll put a labyrinth of hurdles in our way, unless we stop them.

You're looking at it the wrong way.

A handful of stamps, a couple of boxes, and some phone calls to local authorities would let you both dispose of your useless spent rimfire cases, *and* have just about every elected state official in Massachusetts facing felony charges.

@Samrobb: in Massachusetts, the laws only apply to the Little People. The local authorities watch out for each other.

You don't need to step very far back before this looks like lunacy.

D.C. has the exact same mischief. I could become a felon there for a spent 22LR kicking around in my car trunk.

When traveling to and from Maryland and Virginia, I (and my wallet) tend to stick to the beltway.