The Inherent Contradictions of the (American) Bismarkian Welfare State 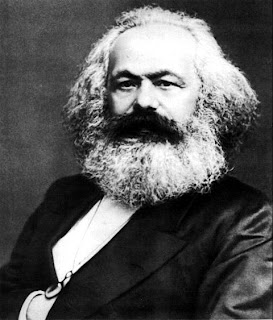 Karl Marx was a bright dividing line in the history of Socialism. Before him was a mish-mash of well-motivated but poorly conceived thinking, like Robert Owens' New Lanark. After him, it was a scientifically grounded theory of economics.

And "scientific" is precisely the right word. Marx was frankly contemptuous of the Utopians, who offered nothing concrete but "please be nice, mkay?" His theory explained - in a way that nobody else had - why the end of capitalism was not just to be desired, but inevitable. He identified its key internal contradiction.

Marx was the first to observe that the profit rates of industrial capitalism were declining, and had been for decades. In this, he was correct; while the introduction of the steam engine opened up many more places as attractive sites for factories, the appearance of many more factories drove down the cost of finished cloth, and the profit per unit with it.

To Marx, the trajectory was unmistakable, and there was only one possible consequence: the factory owners would be forced to cut labor costs to maintain their return on investment. There was plenty of this going on, for example the replacement of the high skill spinning Jennies with easy to operate self-acting Mules; the weavers who ran the Jennies were high-skill and high-cost, which made them high-maintenance ("uppity"). Some factory owners simply smashed up the Jennies, fired the weavers, and brought in children to tend the Mules.

The key consequence was what made Marxism so different: the declining profit rate led directly to the increasing immiseration of the masses, which would be the trigger for Socialist Revolution. With Marxism, you didn't need "nice" - these "internal contradictions" of the capitalist system would cause it to come apart.

Of course, it didn't. What Marx missed was that the Industrial Revolution changed the game. It wasn't unit profits that mattered, it was total profits, which soared. So much money was made, in so many different industries (cotton, then iron, then railroads and transportation, then industrial chemicals, then electricity, internal combustion) that the population as a whole wasn't immiserated. While there were certainly portions of the population living in abject misery in Edwardian London, there were many more who had moved into the middle classes.

There had also been a revolution in political structures, particularly the Bismarkian Welfare State. Otto von Bismark was the "Iron Chancelor" who led the reunification of Germany in the 1860s. He pioneered many of the government social programs that we recognize today: old age pensions, accident insurance, and particularly health care, the major political issue of today. FDR and Lyndon Johnson were the big American practitioners of this philosophy in the United States. It's plausible - although by no means proven - that these government programs saved industrial capitalism, by reassuring the nascent middle classes that their lives would be better under the current system, than under revolutionary socialism. It's certainly turned out that way.

It appears that this political system is creaking to a halt, and it looks like there is a set of internal contradictions at work slowing it. The contradiction comes from a tradeoff that's become unbalanced:

It can't. We'll come back to this in a bit, but first, let's look at the current situation in the United States. The engine that has been funding the entitlement programs is running down:

The Dow has been flat for a decade, and nobody expects it to pick up in any significant way anytime soon. People's sense of future prosperity, in terms of 401(k) or pensions funded by the market have been squeezed. During the first decade of this century, that sense of prosperity was fueled by housing prices, which have also been squeezed: 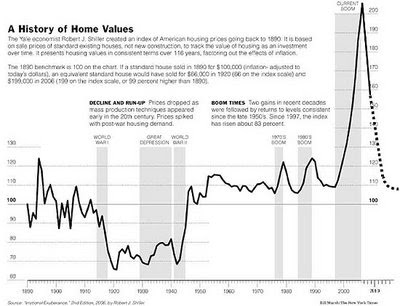 I think that these two precisely capture the restless mood of the nation, and explain much of the voting pattern since the 2006 election cycle (throw the bums out). Add what's going on with the current entitlement programs: 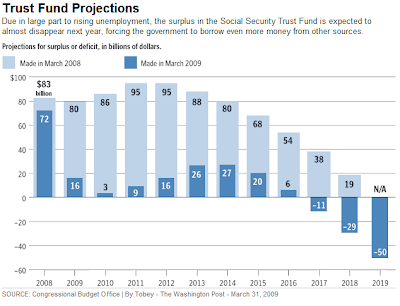 It's worse now, after a year of recession. And Medicare is bleeding even worse. This leads the chart that Insty posts all the time, about the budget projections:

And this is almost certainly worse by now as well. the response of the Political Class? The biggest government social program of all time. How on earth did this come about?

The deal was that the government would buy social peace. The problem for the people who make up the government is that the way to make a name for themselves is with bigger, more visionary projects. Let's take a simple example: city planning. The first really big advance was a Cartesian grid pattern for streets: north/south avenues and east/west streets. So what do you do if you're the next urban planner? Maybe radial grand avenues (like in Paris), but this isn't as useful. What if you're the 426th urban planner? The biggest wins are at the beginning.

And so with social programs. Bismark and FDR plausibly did save industrial capitalism, by helping to ameliorate people's fears of future poverty. It was actually a near thing, too, as a study of post-War Britain shows. So how does a new, ambitious politician make a name for himself? Go big, or go home.

But if you go big, you spend big (or you inflate big, which doesn't win in the long run). And so back to the deal: social peace in return for industrial capitalism. If the politicians have a different view of social peace than population, then there's your contradiction. Remember, the early gains are always the biggest. The biggest gains in people's perception of safety against future poverty were handled by Bismark, FDR, and LBJ.

Which puts Obama, Pelosi, and Harry Reid in a deep hole of contradiction. The health care bill is very unpopular, in no small measure because most people are generally happy with their health care program. Sure, some are not covered, and people with pre-existing conditions are screwed, but we're talking most people. And so you see a ratcheting up of the scare talk (it's a crisis!) at the same time that the details of the program are hidden (vote for the bill so we can see what's in it), and people aren't buying it. It's the Bismarkian Welfare State that's scaring people now.

I think we're at the end of the road. I also think that this is apparent because the Internet allows information about this to get out, despite the best efforts of the political class and the media to control it. The Political Class hasn't figured this out yet. Marx could tell them why.

UPDATE 11 March 2010 11:49: Two separate takes on how it's the state that's scaring people. ASM826 on what if doctors quit practicing medicine:

Even if you have a card that promises to pay for all your health care, what does that card do if there is no one to present it to? When you are standing outside the closed and shuttered office wondering where to go next, whose fault will it be?

If the cost controls fail, we aren't just right back where we started: we're much, much worse off. As you may have noticed, broad-based entitlements are nearly impossible to cut, much less repeal, which is why so many progressives are willing to sacrifice the current majority on the pyre of national health care. So there's a not-insignificant chance that we'll end up with a broad-based entitlement that we can't cut and can't pay for. Hello, budget crisis.

You can make a point that the Political Class recognizes the contradictions, which is why the bill is 2000 pages of opaque text, and why the Democratic Party in particular won't publicly admit what they're up to.
Posted by Borepatch