An asteroid didn't kill the dinosaurs

A post over at JayG's place got me getting all dino-nerd pedantic in the comments. We've known this for 20 years, but this may be the first that some of you have heard of this. What gives? 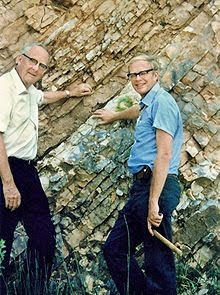 Luis Alvarez is the man behind the asteroid theory. In 1980 he published a paper showing a thin layer of Iridium in the strata dividing the Cretaceous and Tertiary periods (the "K-T boundary"). This layer was seen at many places all over the globe, and Alvarez proposed that an asteroid impact threw enormous amounts of Iridium-rich debris into the atmosphere, blotting out the sunlight and causing the mass extinction at the end of the Age of the Dinosaurs.

This theory seized the imagination of much of the scientific community, and absolutely captivated the press. By the mid-1980s, you didn't hear any alternative stories about the end of the dinosaurs.

Like Anthropogenic Global Warming, the asteroid impact extinction proposal is terribly weak. First, while there is solid evidence for an impact crater off Mexico at this time (the Chicxulub impact basin), it is by no means the largest such impact crater that's been discovered. Other, larger impacts did not cause extinction, and other mass extinctions had no asteroid impact. Mass extinction events occur all the time, most recently 10,000 years ago with the Wooly Mammoths and Sabre Tooth Tiger. The unanswered question here is what was different at the end of the Cretaceous.

Second, the finest granularity of measurement we have for the fossil record 65 million years ago is about 100,000 years; there's no way that we can tell that a "sudden" extinction took less than 100,000 years. There are lots of signs that dinosaurs were in trouble in the time leading up to the end of the Cretaceous - the rate of formation of new Genus groups (the next size up in the classification scale from species; humans are genus Homo and species Sapiens). There were fewer and fewer genus groups represented in the fossil record as the end approached, and a very small number of genera made up the vast majority of the populations (e.g. 80% of large specimens were Triceratops in the Hell Creek fossil layer - the one right below the C-T Boundary). This is not a sign of a healthy, robust population.

Third, not all large animals went extinct. Crocodiles grow to very large - we might even say dinosaurian - size, and they are very little different than the crocodillians from the Cretaceous. Large mammals from the Cretaceous survived the extinction event - for example, Repenomamus Giganticus, best described as an ancient version of R.O.U.S that fed on dinosaurs. Plant species were hit much less hard by the C-T extinction, which doesn't fit the whole "dust cut off all the sunlight" hypothesis.

Fourth - and in my opinion most significant - is the discovery of dinosaur fossils above the K-T Boundary. The first paper describing this was published in Science in 1985 (Sloan et al.). [UPDATE: Wolfwalker in the comments points out that this can happen if the ground is disturbed; it's not the strongest point in the argument.]

So what gives? Longtime readers know that I'm sort of nasty and suspicious, and I think that this is Yet Another Example of a scientific error cascade driven by the politics of the day.

The 1980s saw the heating up of the Cold War. The Soviet Union invaded Afghanistan in 1979, shocking President Carter and a State Department over-invested in Détente. Ronald Reagan promised to confront Soviet expansionism, for example the deployment of Persing nuclear missiles in Europe to counter the Russian SS20 missiles already there. The peace movement - its core backed by the Soviet Union - agitated for a "Nuclear Freeze".

Some scientists (most notably Carl Sagan) stepped into the fray on the Nuclear Freeze side, with a literal theory of a freeze. Sagan proposed that a large scale exchange of nuclear weapons would throw so much dust into the atmosphere as to trigger a global cooling similar to the one that supposedly ended the dinosaurs. This was featured prominently on the PBS TV show Cosmos:

As I wrote in my post on Sagan and the Drake Equation:

Sagan talks a lot about the variable for intelligent civilizations that blow themselves up. He even tries a couple of different values for that variable, so see how the number N changes. Go watch it again, paying attention to this emphasis. It's quite striking.

So what does all this mean? It means that scientists are human. They want to be relevant. They want their work to be important, meaning they want it to apply to the issues we face today. It means that they run in herds.

It means that we should all be properly skeptical about the pronouncements from Gray Beard scientists. JayG pointed out that some scientists have gone back through the published scientific literature and pronounced the issue to be settled. Whatever.

Max Plank famously said that a new scientific truth does not triumph by convincing its opponents and making them see the light, but rather because its opponents eventually die. What's happening with Global Warming is actually very unusual, and only occurring because the AGW hypothesis is still in its infancy. It hasn't had time to calcify into Received Wisdom. The asteroid-killed-the-dinosaurs may need a generation of paleontologists to suffer their own personal extinction event before the science is updated.
Posted by Borepatch

I've been to a dig at Hell Creek...held a 60million yr old tricertops horn as a result, which really gives perspective on the word OLD. lol

My oldest is a paleontologist!

Dumping all that carbon in the atmosphere warmed the planet. They didn't listen to the Gorosaurus and so they all drowned due rising sea levels as the climate changed.

I said it once and I'll say it again: you go back far enough and there simply isn't enough evidence to prove anything.

Thanks for the new info. Time to update my assumptions.

I resemble that statement :-)
"It means that we should all be properly skeptical about the pronouncements from Gray Beard scientists."

Scientists are like anyone else - they have mortgages and orthodonture bills and kids to put through college and preconceived notions and egoes and affairs and choir practice and cherished ideas.

Great post, you really took me back. I even found a couple of old Carl Sagan books the other day!

I did a geology degree in the mid 80s. A strange time in Britain, Miner's striking, the main oposition party well and truly infiltrated by Trotskyites, print union riots, Cruise missiles arriving, ugly lesbians in shitty caravans outside US bases, Student union resolutions to free Mandela, classmate's moslem landlords being arrested for terrorist offences ahead of a state visit by Rajiv Gandhi, and a Libyan student coming back one September with his 9 year old wife(it was good enough for his "prophet", so it was good enough for him).

We were an odd bunch, we regarded any mass extinction theory as the best way to trash your scientific cred, and were well aware that the biggest mass extinction in the "recent" record was the end Permian (just read the other day that that was "due to Global Warming" Hah, I wonder how they worked that out). As for iridium anomolies, has anyone tested shales of any other age?

There'd been a reduction in Dinosaur diversity for a lot of the Cretaceous, and I remember reading about the finds of large herbivour dinosaurs allongside herbivour mammals in the Palaeocene.

I'm a strong believer that we still have dinosaurs - they have feathers!

Just one thing though, the youngest Siberian mammoths are younger than the Egyptian pyramids, and some of the books of the bible

Stephany, as they say in New England, "That is WICKED cool!"

Atom Smasher, yes you did. I blame you for this post, actually. ;-)

Keith, those were strange times. I like your question about testing other shale layers for Iridium. And agreed on the birds: carving up a fryer will teach you an awful lot about T-Rex anatomy. And IIRC, there were dwarf Mammoths that survived very late, on isolated arctic islands - perhaps these are the ones you were talking about?

"M. exilis should not be confused with the mammoths of Wrangel Island or Saint Paul Island, which were small races of the woolly mammoth (M. primigenius) and which died out around 1700 B.C. and 4000 B.C., respectively."

Fourth - and in my opinion most significant - is the discovery of dinosaur fossils above the K-T Boundary.

This alone of your list of evidence isn't trustworthy. As far as I know, all reports of dinosaur fossils above the iridium layer consist of teeth and other tiny bits, which can be explained as examples of "reworking" -- that is, fossils sort of fell out of older rocks as they were eroding, then were reburied in new, younger rocks.

Which isn't to say that I accept the Asteroid Doomsday theory. I think the evidence for an asteroid strike at the end of the Cretaceous is incontrovertible. The iridium isotope ratios prove that the source of the iridium anomaly is extraterrestrial. But that impact either had no significant biospheric effects, or it simply finished off a dinosaur fauna that was already in deep trouble. My best evidence for this, the evidence that convinced me, is a detailed study of lower vertebrates from the Hell Creek and Tullock formations. This is the only known area where there's a good record of land vertebrates that exactly straddles the K-T extinction event -- the Hell Creek Formation is latest Cretaceous, the Tullock is earliest Paleocene. Put simply, for non-dinosaurian tetrapods, there wasn't any mass extinction.

Wolfwalker, you make a good point about reworking, although some of the fossils were found significantly (1.5 meters) above the K-T Boundary. But doesn't preclude disturbance after the fact.

I 100% agree that the evidence for an impact is overwhelming, but that the dinos were in big trouble anyway. I can even see the "final nail in the coffin", but there are just too many holes in the hypothesis to be satisfying to me.

You and me need to get together ant talk about this over beers - with Stephany - some time ...

And that place should be the Hell Creek bar, in Jordan, MT. They modeled one of the "Jurassic Park" sets after it. The town can be missed if you blink, and fossils abound at your feet.

Mass extinction events occur all the time, most recently 10,000 years ago with the Wooly Mammoths and Sabre Tooth Tiger. The unanswered question here is what was different at the end of the Cretaceous.

I was told by a REAL scientist on a morning news show that the Mammoth was made extinct by humans. He didn't say if it was those carbon belching Flintstone mobiles or those Evil Black Speartips that did them in, though...