The Ministry of (politely) replying to Wookie-Suiters

The UK National Archives has a set of declassified correspondence about UFOs between UK residents and the UK Government. It's quite a read, and what struck me is just how polite Her Majesty's officials are in their replies to people who run the gamut from charmingly eccentric to stark raving bonkers.

I was utterly charmed by this from a gentleman who, saddened at the slaughter of cattle during the Mad Cow problem, came up with a creative solution for the Government to consider:

It seems inevitable that millions of cows will have to be slaughtered to restore public confidence in British beef and it would be very wasteful to just incinerate these cows.

Every year hundreds of cattle get mutilated for scientific purposes by aliens, there is a lot of documented evidence for this as I'm sure you know. Perhaps the cows that need to be slaughtered could be offered to the aliens for dissection.

This would save the cost of incineration and save healthy cattle from mutilation.

I have no idea how to contact the interested parties but I am sure that your department or the CIA know where to start. I do not know if cattle mutilation only happens in America, but I am sure that the aliens could collect the cows from this country.

I am not trying to sensationalize just hoping this solution will save some healthy cattle and cut down on the cost of incineration. The public need never know.

Here is the original: 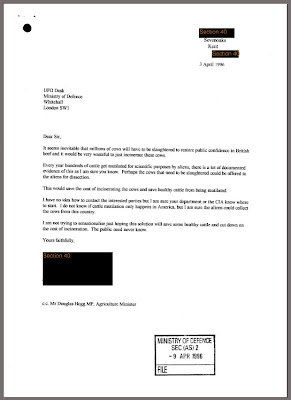 The detailed reply is polite and information-rich. I wonder if it helped: 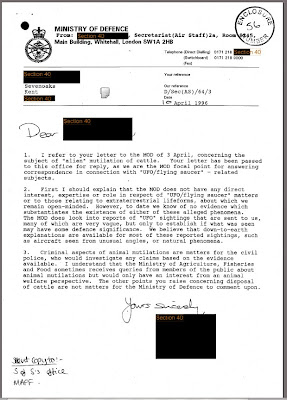 Sometimes a whole string of correspondence springs up, with people replying to the government reply:

Thank you for your letter of February 29th in reply to my letter concerning UFOs. In your reply you didn't answer my question properly that if the MOD became aware of the existence of extraterrestrial life would the abduction of U.K. citizens by them be worthy of defence significance?

Also as you said that you had not seen the video footage of a UFO taken over Swindon in 1994, as featured on BBC 2's "Fortean Review of 1994", would you like me to send you a copy of it as I have it on video? 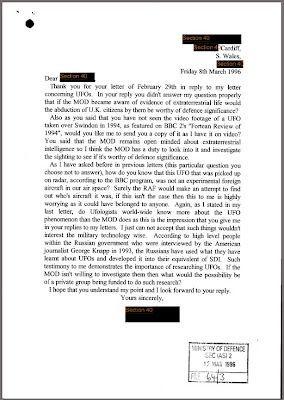 There's someone in Her Majesty's Government who replies to each of these. Some are sent to Downing Street, and get a reply from the Prime Minister's office. Sometimes the reply catches the sender off guard:

I am writing just a short note to thank you for the reply to my letter dated 8th March it was a very interesting response and one I did not expect to receive . 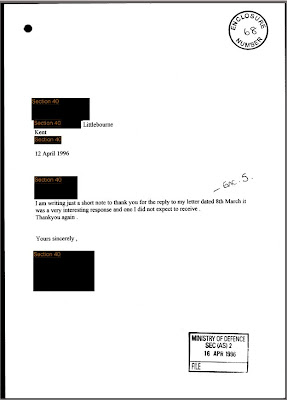 Mostly these seem to be harmless cranks, but sometimes the cranks organize themselves, as with the Birmingham UFO Society:

We have received a couple of letters from your department stating that the M.O.D. and HM Forces have responsibility for the defence of the United Kingdom and obviously remain vigilant for any potential threat from whatever source.

We understand that in all instances to date in connection with unexplained aerial phenomenon the M.O.D. have made no further attempt to investigate and establish what may have been seen.

We will then on receipt of this information be in a position to know whether we can contact you with what may be threats from various sources.

We look forward to hearing from you. 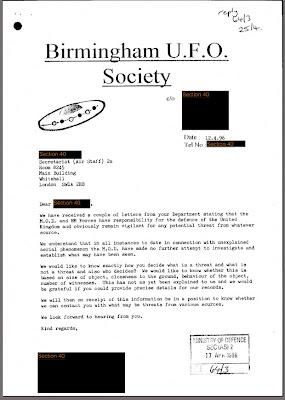 We don't have to imagine the reaction by the civil servant who gets this sort of thing, as we have an internal telephone message that one took for his co-worker:

I took a call on Kenny's phone from someone who appeared to be one of your UFO regulars. He has mislaid our letters to him (starting early 95). Could we send copies? 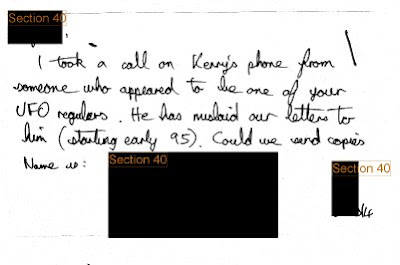 Another day in the office, keeping the Septer'd Isle safe from space aliens. And Wookie-Suiters.
Posted by Borepatch

Labels: burn before reading, made of win, ZOMG