Thanks to everyone who voted in the poll, or left comments (note to self: post more often on cats to get traffic up ...). 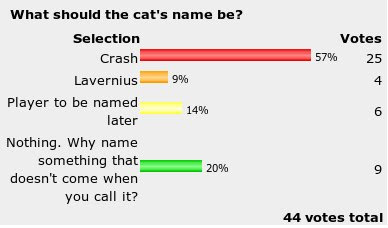 Wow - 44 votes seems like a lot. And it's a good thing, too: I showed #1 Son the results as of early last evening, when Lavernius only had one vote. His comment: "It must have been your other reader." The snark is strong, in that one.

Alas, this was all for naught. While I do quite like the name Crash, and while I was able to veto Lavernius, the Vox Populi has spoken.

The kids want a name from one of the Call Of Duty characters, or something. I can live with Ghost. He gives serious head-butts, at least.

The Order Of The Day for Ivan the Terrier and Little One Eyed Dog is to get used to the idea of Cats and Dogs, living together.

UPDATE 27 March 2010 10:35: Today's Saturday Redneck is inspired by Ghost. While he's laid back, and seemingly not at all rocked up, he does bring the whole Old Made New thing to live.
Posted by Borepatch

Labels: me me me, pets, politics

This city is headed for a disaster of biblical proportions.
Mayor: What do you mean, "biblical"?
What he means is Old Testament, Mr. Mayor, real wrath of God type stuff.
Exactly.
Fire and brimstone coming down from the skies! Rivers and seas boiling!
Forty years of darkness! Earthquakes, volcanoes...
The dead rising from the grave!
Human sacrifice, dogs and cats living together... mass hysteria!

And you named the cat Ghost?!?!

Awwwww, bienvenidos, Ghost! Now you need to get him a happy Gadsden blanket for happy naps!

Uh, BP. You ever read any John Ringo? http://hradzka.livejournal.com/194753.html
I love the name Ghost but every time I hear it I think of this book. (Once read it can never be unread)
And now you will too.
You're welcome.

The name is from Call Of Duty: Modern Warfare, from the character Simon "Ghost" Riley

Like I said, not my first choice, but better than Lavernius (from Red vs. Blue).