Please stop yawning, this is more important that you might think. I know, another day, another IPCC report cock-up. Remember the Himalayan glaciers that were melting away, or the Hurricanes that were going to kill us all, or the drought that was killing Australia, or the Greenpeace press releases included as "peer-reviewed science"?

Those, we are told, are in the IPCC AR4 reports from Working Group 2 (impacts) and Working Group 3 (mitigations). Terribly unfortunate, old chap, but the science is all in Working Group 1 report, don't you see. So it's all OK, and all you Deniers can just get the heck off our lawn.

So we've been told. Oops:

As I document below, WGI did a poor job in regard to Antarctic sea ice trends. Somehow, the IPCC specialists assessed away a plethora of evidence showing that the sea ice around Antarctica has been significantly increasing—a behavior that runs counter to climate model projections of sea ice declines—and instead documented only a slight, statistically insignificant rise.

The science is settled, remember? It's settled because all that annoying stuff that falsifies our computer model predictions has been filed under "insignificant". The comments from the IPCC reviewers were incredulous:

Section 4.4.2.2 [the section on sea ice trends]: The presentation of hemispheric, regional and seasonal trends is also incomplete, misleading and biased to NASA work (Comiso).

Other than incomplete, misleading, and biased, it's rock solid. Other comments:

On the topic of Antarctic sea ice trends, the “consensus of scientists”—as the IPCC likes to call itself—was wrong, led astray by the extremely poor “assessment” of the scientific knowledge-base made by a very few people who were directly involved in preparing that section—people who were either being territorial in defending and promoting their own work, were being guided by higher-ups to produce a specific IPCC point-of-view, or both.

From all I have been able to find out about this so far (including enlightenment gained from the Climategate emails into how other sections of the AR4 were carefully constructed), I would rate it “extremely unlikely” (in IPCC parlance, less than 5% chance) that what transpired was dumb luck, born of the IPCC authors’ unfamiliarity with the peer-reviewed literature—the very thing they were supposed to be assessing.

I am not sure which case is the most embarrassing.

Embarrassment is the least of the IPCC's problems, I'd think. The obvious question is what else in the nothin'-but-science WG1 report is "incomplete, misleading and biased"? The World wonders.

What's that? The Atmospheric Water Cycle? 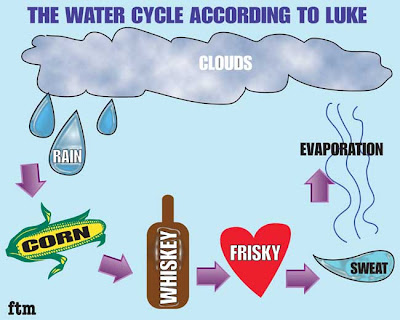 There. Fixed it for ya.
Posted by Borepatch

I don't listen to country, but my roommate just made me listen to that song. I think it is a relatively accurate scientific representation, with lots of public support behind it, and so must be correct.

And you made that song get stuck in my head all morning long.