The mathematics of Romney's victory

I've been predicting a Romney victory for quite some time now.  This has been based on a stated distrust of the polls: specifically, an overweighting of Democrats in the samples.  I've been using a (made up) rule of thumb that the polls overstate Obama's support by 5-7%.

They have party identification results online dating back to 2004. Here are the 2012 numbers through August: 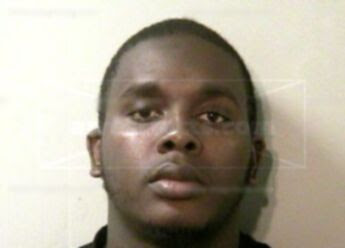 Interestingly (and in great contrast with almost all of the polls you see), this post shows the same poll for 2004, 2006, 2008, and 2010 so there is historical perspective.  It compares the results of the elections in those years to the party affiliation polls from those years.

The short answer: the election results matched the poll predictions precisely.  You really need to RTWT.

Now look at the average of this year's polls, which look like they sample D+5 on average.  That's exactly backwards - according to this, they should be sampling R+9.  So rather than Obama up by 3 (margin of error), Romney is actually up by 6 (way outside the MoE).  And quite frankly, my prediction of Romney 346, Obama 192 is looking like I'm considerably overstating Obama's chances.

There are of course two issues here:

1. This is a national poll, while the returns that matter are State by State (Electoral College).  We can extrapolate this to the States, but we're kind of going a bit out on a limb.  Of course, that's exactly what I did in my prediction of 346-192 Romney.

2. The votes that matter are the ones that are cast in November, and party identification is quite frankly not as important as turnout.  The post I linked to does a very good job of covering historical turnout compared to these polls, but once again we're extrapolating - as will happen when you're talking about any poll.

At the end of the day, I'm confident in these numbers.  There's plenty of corroboration - polls of whether the country is on the right track or the wrong track reliably come in with large majorities saying "wrong  track" (the latest is something like 55 wrong track vs. 39 right track).  Perhaps two thirds of respondents say that the state of the economy is the primary thing they will consider at the polls this year.  None of this is good for Obama.

Add in my take that the Media has pretty well destroyed their credibility - trust in the media has been declining for more than a third of a century - the only rational conclusion is that this will be a landslide year for Republicans.  And so, I'm updating my projection to Romney 359, Obama 179.  This is based on a 10% shift of current polling numbers at Election Projection.  That means that only "Strong Obama" and "Solid Obama" actually go (D), and everything else goes (R). 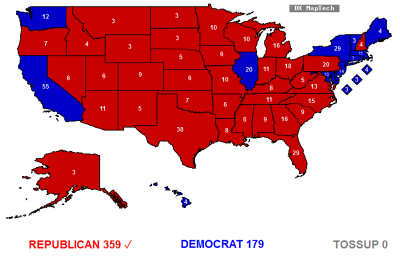 Or more properly said, 179 Electoral Votes are won by Obama, and 359 E.V.s are won by "Not Obama", because this election is - like 2010 - a referendum on the Administration of Barack Obama.  I quite frankly don't believe that 37% of voters identify as Republican in any meaningful way.  I absolutely can believe that they identify as someone energized to vote the current occupant of 1600 Pennsylvania Ave out.

So there you have it - predictions, now with moar data.  I may be wrong here, but I've tried to show my work.  You can make your own electoral map, if you want.

Note that I do not say that a Romney victory (especially of this magnitude) would be A Good Thing.  On the contrary.  But the numbers are the numbers, and they don't look good for the Democrats.
Posted by Borepatch

Ughh. If Mittens gets elected with this type of landslide, he'll see it as a "mandate" and might go off and do something stupid. Well, something stupider than he might have done otherwise.

My assessment is that you should probably give Obama Michigan, Ohio, Pennsylvania and West Virginia. These are states that can turn out the union and welfare votes and I don't see any of them going to Romney as of right now. I'd like to be wrong, but if I were putting money on the table, I'd give Obama those states and the 59 votes that go with them.

Is this assuming the One doesn't decide to stay in office under some extra legal pretext.

Murphy's law West Virginia is coal mining country and they have been hit hard by Obama's policy of trying to destroy the coal industry. He will lose that one.

I'll admit that seeing the pollsters adjusting to seemingly made-up and weirdly skewed party-breakdowns has me scratching my head, until I learn more about it. But, this seems to swing the pendulum way the other way. How do you get from a result like 37.6-33.3 to saying they should sample R+9 (which you then round up to 10)? Maybe I misunderstood something here...

Don't forget the other two of the 52 states when counting Obama's electoral votes.

I like your numbers, but I think it will be closer. Still a Romney win, but closer.

It's pretty obvious that the MSM is lying to us and lying to favor Obama.

Try as they might to make every Romney comment a "gaffe", his campaign seems to benefit from each one. Now, even a majority of Americans agree about his "government does too much" comment and the 47%.

I too have been predicting that the RomneyBot 9000 will whirr into office via a blowout, but Minnesota? Not a chance. We couldn't get a Republican *governor* elected in 2010 - we're not tilting toward a Republican President in 2012. Man would I LOVE to eat crow on that though.

There is a problem in your methodology, BP.

You're forgetting to count the votes of dead Democrats. That will take any state and push it D+3.

-bigdogtimc
/always here to QA your mistakes :)
//it's a joke, son

On the gripping hand, NJ elected Romney's younger brother from another mother (politically speaking) as Governor not 3 years back. The only thing I know from this cycle is that no one knows what's going to happen.

Obama is spending money airing campaign ads in Seattle. If WA is solid enough for him that he's likely to take it in November...why would I be seeing Bill Clinton's face practically every time I turn on my hotel room TV, trying to convince me to vote for his party's guy? I certainly don't see that happening at home. (Home, for me, is the part of Indiana where all our TV comes from Chicago. And of course, Obama could sodomize a goat and then set fire to a live kitten on national TV and still win Illinois.)

I'm thinking any place where they think they have to spend this much money, they're probably going to lose.

Wasn't it the WA governor who was voted in recently by a majority well under the margin of error, with some oddities in vote handling?

Ian, it sure was. And then her campaign manager went to work for Al Franken who surprisingly won by a similar small margin with suspicious voting patterns.

Thought so. Food for thought, innit?

I hope you're right BP. I've got a potentially humiliating bet on the line here.

RWCG, the polls are D+5 when it looks like party affiliation is R+4.3. The process of higher mathematics means that's a difference of 9.3. I rounded it up to 10, I do confess.

rofl@map. i hope you won't go suicidal on us when obama wins and the dems keep the senate, i know how some of you right wingers can get when baby doesnt get his bottle.