Flying with a sense of humor is prohibited

It seems that it wasn't the TSA that was the problem, it was Delta Airlines.  They didn't like it when a guy wore this t-shirt: 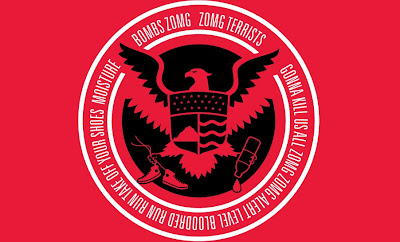 
I was then questioned by TSA about the significance and meaning of the shirt. I politely explained that it was “mocking the security theater charade and over-reactions to terrorism by the general public — both of which we're seeing right now, ironically.” The agents inquired as to the meaning of the term “ZOMG” and who it was that I thought was “gonna kill us all.” As best I could tell, they seemed to find my explanation that I didn’t think anyone would be killing us all and that I was poking fun at overwrought, irrational fears exhibited by certain members of the flying public to be satisfactory.  And moreover, they clearly deemed my shirt to be no legitimate threat.

Soon afterwards, once the boarding process had commenced, the Delta supervisor pulled me aside again — this time accompanied by not only three TSA agents, but also multiple Niagara Frontier Transportation Authority transit police. I was questioned some more and my wife was also pulled out of line for additional questioning and screening. Our bags were searched, my shirt was photographed, we were asked multiple questions about the cause of our visit, how often we make it to western NY, and our drivers’ license numbers were taken and radioed in for what seemed to be a quick background check.

At this point, the TSA agents appeared satisfied we had nothing suspicious in our luggage and that we posed no threat. However, the Delta supervisor informed us the pilot had decided, regardless of the outcome of the multiple TSA screenings and my willingness to change shirts, that due to the discomfort my shirt has caused, my wife and I would not be allowed to board the aircraft. Passengers on the plane supposedly felt uncomfortable with my very presence on the flight. And the Delta manager went out of his way to point out that he wholeheartedly agreed with the pilot’s decision.

So how bad is Delta's overreaction?  They make the TSA look reasonable.  Yowzer.
Posted by Borepatch

Yep, 'question' authority and you WILL pay the price... sigh... But wear a Che shirt, or something similar and it's all good...

That's why I drive to Canada. I have nothing to fear since I'm not a Canadian author.

The Transit cop never heard of Michigan? WTF? I seems we are turning our security over tot he lowest common denominator.

This needs to be the last thing the Delta PR people see on the inside of their eyelids every night and the first thing they see upon waking in the morning.

I despised Delta, even before reading this, on a combination of personal experience and general principle. There isn't even a word for what I think of them now.

I was tempted to buy one of the shirts but damned if I'll see any of MY money going to the Southern Preposterous Lies Center.

Aw hell. I was gonna post something but it's just not worth it anymore.

And that is why I drove from Arizona to Florida. I refuse to spend my money on airlines until there is a pro-freedom change.

Yet another reason I won't fly Delta. What a crock.