The Media is destroying Barack Obama

The irony here is rich.  In their desperation for an Obama victory, the Media is driving him into a hole.  In this, they are likely following the lead of the Obama Campaign whose strategy is that since Obama has no accomplishments that the voters like, they will distract the country with LOOK A SQUIRREL!!!1!!one!

And so we lurch from one this time it will really end Romney's campaign event to the next: Romney is a felon, Romney doesn't pay taxes, Romney killed sumdood's wife, Romney's "gaffe" that our embassy in Egypt shouldn't have apologized for Americans exercising their right to free speech, Romney's "gaffe" that people who like government dependency won't vote for him.  And that's just the last month; if I weren't so lazy I could give you twice as many examples of ZOMG HE'S DONE FOR NOW!!!!

The Media thinks that they're helping Obama with all of this, keeping the focus off of the economy.  They're not.  They're killing him with kindness. 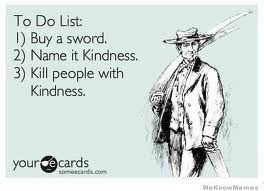 The problem is that this election will hinge on voter turnout.  The Democrats have a big problem here, because their base is pretty demoralized - the disappointment that Obama couldn't live up to how he sold himself in 2008 is so thick that you can cut it with a knife.  And so the distractions, trying to paint a fundamentally decent man as an ogre.  Nobody with half a brain really believes it, and so while a lot of the base will rally to the cause, it's rolling the rock uphill.

"Well so what" I hear you ask.  Why is this bad for Obama?

Remember, this election is all about turnout.  The media is doing its usual heavy-handed (ham fisted, really) moralistic scold routine, just like they did with Chick-Fil-A.  Remember what happened?

That's the crowd that turned out to support the evil Chick-Fil-A corporation.  In Chicago.  It was like that in California, too.

The media is energizing the Republican base, and likely a fair number of independents as well.  For every Democrat who sighs at the tarnished unicorn tinsel and trudges to the polling station, there will be a GOP voter whistling while he shows up to vote against The Won.  Probably more than one.

Like I said, the Media thinks that they're helping the Democrats.  They don't have any idea that they're sinking his ship, and probably the first inkling they'll get about it is when turnout runs much ahead of projections all day on election day. The Media have been using their power for years, to try to shape the Republic to a more pleasing form.  The country has been catching on.  The Media is about to get a lesson on just how powerful their influence is, good and hard.


There's letters seal'd, and my two schoolfellows,
Whom I will trust as I will adders fang'd—
They bear the mandate, they must sweep my way
And marshal me to knavery. Let it work;
For 'tis the sport to have the enginer
Hoist with his own petard, an't shall go hard
But I will delve one yard below their mines
And blow them at the moon.

I think you misinterpret how people who view the Mud Slinging Media will perceive what you believe is shovels full of dirt being thrown atop Obama's coffin. I hope I am wrong but I think it just makes the loons who voted for him the first time all the more likely to vote for him again. As for undecided voters, I am not too certain that Americans, on average, are apt to see the negative reporting on Romney as anything but truthful and accurate and thus it is going to make him look bad in their eyes and lose their votes. Sure some are smart enough, but are enough smart enough ti see through the smoke and mirrors. I can only hope so. Another 4 years of Obama and there will either be a violent revolution or a police state and no Constitution.

All the best,
GB

I call it Joel's Law, and I coined it right after the second Clinton win:

Never Underestimate the Stupidity of the American Voting Public.

So far it has never let me down.


The problem is that this election will hinge on voter turnout.

I think that is part, heck the majority of the reason, the media is trying to pump up the 47% aspect. If you read Romney's full remarks, it is clear that he is talking about the 47% that will vote for Obama - and it is Romney's job as a candidate to sway the undecided 5 or 10 percent.

The media can't let that get out -- that the election really hinges on very few people overall. In their efforts to carry water for Obama, the ignore salient points Romney made, especially about the economy.

I agree that the election will be decided by turn out and I agree that Obama's base is not motivated. However you are wrong about the negative ads not hurting Romney. We asked our daughter why young people still supported Obama when he had failed in his promises and they could not get good jobs. Her answer was, "They think he is mean."

That young people are not motivated to vote hurts Obama more than Romney. But Romney is not going to win their votes unless he changes his image. He has the money to do it, but he is not making the effort.

I agree, for the most part. I'm just not as positive about the end result as you may be. Why am I not ready to do the victory dance, when I agree with most of what you've written?...

"Nobody with half a brain really believes it"

There's the problem right there.

If it were true that no one with 1/4> of a brain really believed the smoke screen, I'd feel better. There's a huge number of half-wits who are ready, willing, and able to cast a vote.

I am very engaged in the election. I just wish Romney and Ryan were fighting as if this is the most important election in a generation.

Part of this media-fueled dynamic is an existential crisis among the Media At Large. They're not only invested in "Obama is good and should win" because they think that he's good and should win. Now it's also very obvious self-interest. The M.A.L. adverstised President Three-Putt as some sort of genius Jedi demigod, and sadly for them, he was narcissist enough to agree - he was gonna lower the seas and solve everything forever because he was smarter and gooder than everybody else, including all the lesser folk he permitted to bask in his fragrant proximity.

Alas, he isn't. In the old days that wouldn't have been a problem, since the M.A.L. could just unmake him and carry on like usual. Now they face a perfect storm... nobody believes them anymore. They have a debt of trust and goodwill roughly as large as the actual debt of the US Treasury, to say nothing of their actual money debts. As a result they can ill-afford any further hit on their credibility, even that of admitting that they were willingly taken in by Ye Olde Hopenchange.

Result: they have to double down, even though they are being roasted by the minute on social media and driven to fiscal bankruptcy to match their moral bankruptcy. And when the bill comes due, the collateral on that is Obama's political career.

The cynical and fatalistic may say that they'll manage to drag him across the finish line this one last time, if for no other reason than to prove that they still got it. I think this collateral is already due and owing - Obama has been nearly helpless for months, with events blowing him hither and yon. Even his alleged gift for speeches have had the opposite of their intended effect: the only phrase of his that has really resonated with America is "You didn't build that."

He's toast, and I think he's already landed butter-side-down. The M.A.L. can try to dust him off and five-second-rule him as much as they like, but I don't see it working, and that's even with Romney under their crosshairs for months.

And yet, the polls indicate it's a statistical dead heat.
Don't believe it.

I have a hunch that R+R's laid-back campaign (to describe it kindly) is designed deliberately to energize the base. I'd say it's working — although it's maddening to see a campaign style that appears nextdoor to comatose when you want to CRUSH BHO's campaign.

Sure hope they know what they're doing. Because, you know, this really is the most important election in a generation.

I certainly won't be voting for him. I've stopped voting for the "lesser evil".

Damn right ! I am so sick and tiered of those lying bastard's and their B S I haven't turned a television on in two year's now.