Via Aretae, we find one from the department of correlation is not causation:


But when the person asserted to me that the creation of the Occupational Safety and Health Administration (OSHA) was followed by safer workplaces, all I could do was mumble something about the sun doesn’t rise because roosters crow and that we would need hypotheticals and counterfactuals.

Fortunately, I work at the Cato Institute where there are experts about almost every policy issue, so I was able to track down some analysis about OSHA in the Cato Handbook for Congress. 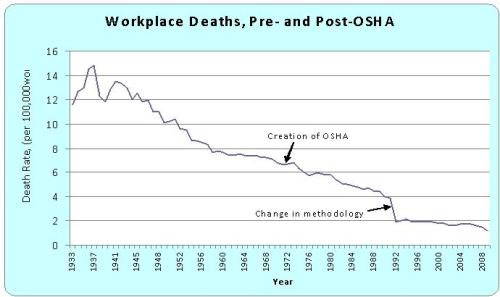 In other good news, NASA is doing a fine job of keeping the sun rising in the east.

Also,  never mistake for stupidity what is driven by malice:


There are least three obvious candidates for reducing global warming that do not require a reduction in energy use. One is nuclear power—a well established, if somewhat expensive, technology that produces no CO2 and can be expanded more or less without limit. One is natural gas, which produces considerably less carbon dioxide per unit of power than coal, for which it is the obvious substitute. Fracking has now sharply lowered the price of natural gas, with the result that U.S. output of CO2 has actually fallen. The third and more speculative candidate is geoengineering—one or another of several approaches that have been suggested for cooling earth without reducing CO2 output.


One would expect that someone seriously worried about global warming would take an interest in all three alternatives. Of course, in each case, there are arguments against as well as arguments for. But if one believes that global warming is a very serious problem and alternative solutions are costly, one ought to be biased in favor of each of them, inclined to look for arguments for, not arguments against.
In my experience, that is not how people who campaign against global warming act. They are less likely than others, not more, to support nuclear power, to approve of fracking as a way of producing lots of cheap natural gas, or to be in favor of experiments to see whether one or another version of geoengineering will work. That makes little sense if they see a reduction in power consumption as a cost, but quite a lot of sense if they see it as a benefit.

Even if you buy into the whole Carbon Dioxide is driving catastrophic Global Warming idea (which I do not, for reasons you will find by clicking on the Clint Eastwood picture on the upper right), the proposed policy responses are exceptionally interesting indeed.  And not "interesting" in a way that leads one to conclude that environmentalists are humanitarian at heart, but rather the contrary.

Since I'm a fan of "show your work", here is mine (well, work that I swiped from some dude on the Internet, but it's quite clear).
Posted by Borepatch

Had a huge comment, elected to publish on my own forum, so as not to hijack yours. Suffice to say- theres no such thing as a free lunch. Sometimes, you take what you want, but you will always pay for it, somehow.

Alternative solutions are more costly, but they are highly inefficient. ;)