Zero to Jackboots in 5 years

Tam coined the term and not only does it fit, we're seeing it play out in the streets of Old Europe.

This isn't what could be described as "far right" in American political terms.  We'd call it "fascist".  The Greek Golden Dawn party is explicitly fascist - nationalist and socialist.  There's quite simply no equivalent of this on these shores - the hyperventilating of the Usual Suspects here just shows that they are either ignorant or tools.  Here's Golden Dawn's logo: 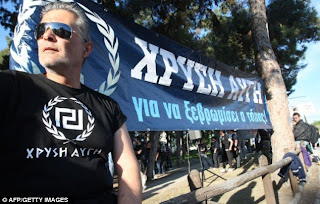 Weimar is playing itself out on the streets of Athens:

Greece's far-right Golden Dawn party is increasingly assuming the role of law enforcement officers on the streets of the bankrupt country, with mounting evidence that Athenians are being openly directed by police to seek help from the neo-Nazi group, analysts, activists and lawyers say.

In return, a growing number of Greek crime victims have come to see the party, whose symbol bears an uncanny resemblance to the swastika, as a "protector".

For a lot of people in poorer neighbourhoods we are liberators," crowed Yiannis Lagos, one of 18 MPs from the stridently patriot "popular nationalist movement" to enter the 300-seat house in June. "The state does nothing," he told a TV chat show, adding that Golden Dawn was the only party that was helping Greeks, hit by record levels of poverty and unemployment, on the ground. Through an expansive social outreach programme, which also includes providing services to the elderly in crime-ridden areas, the group regularly distributes food and clothes parcels to the needy.


The European Elites are not particularly smart, and really haven't ever been - at least, the last two centuries don't offer a lot of evidence that they are smarter than anyone else.  Indeed, looking at the record of the last decade and you are left with the description of the old French Bourbon monarchs - they have learned nothing, and forgotten nothing.

But nature abhors a vacuum, and where the European elites retreat something will advance to fill the void.  The the streets of the Cradle of Democracy glow with reflected torchlight.  If they don't echo with the tramp of jackboots, the question is not why, but when?
Posted by Borepatch

Yep, coming to America soon, or should that be Amerika?

Your average guy on the street will sell his liberty cheaply as long as someone promises to get control of chaos and make sure his kids don't go to bed hungry. Our only hope is to make sure we don't get to that point.

This is NOT a "far right" party. It is FASCIST. As in "nazi". You know, the "national socialist" party? Get that? SOCIALIST??? Are "socialist" partys "right wing"? These are LEFTIST partys. You have given in to the drive by media hype of equating "conservative" to "nazi". Now I, as a CONSERVATIVE, want smaller government and more FREEDOM! And I damm sure aren't a "nazi". Now the U.S. government, with it's cradle to grave, no "big gulp" softdrink, no transfat, BIG GOVERNMENT is more "nazi" than "conservative". And we are going down the same path. But don't parrot the dead tree media in thinking that people as described in this article are "right wing".

Actually, I suspect it isn't fascist any more than it is 'right wing.' Fascism was a political movement with a more or less coherent -- very very wrong in many ways, but coherent -- philosophy and political platform behind it. National Socialism was never a coherent political philosophy. It consisted of whatever Herr Schickelgruber and his pals had to say in order to gain power. The only consistent element in nazism, throughout its lifespan, was a vicious, wildly destructive hatred of the Other.

Old NFO, they say fascism is always descending on America yet landing in Europe.

Less a swastika than a Greek Key, which I first heard of on QVC, believe it or not. I guess my sister (and late mother's) shopping addictions are good for something.

America's leader are not exactly geniuses either. It's a global problem not unique to Europe. After all you have Obama the "smartest" man on the planet. However what does that say about the electorate everywhere if they can all be fooled by such smart men and women.

Fiftycal, I've blogged about this for a while. I have a "fascists" tag on the side bar.

In one of those posts I talk about how in the post war period the European elites slide effortlessly from national socialism to international socialism, and how it will be an effortless slide back. Pretty sure that this is the post where Tam left the comment which is the title here.

A friend's wife just got her Greek citizenship the other day - just in case it gets so bad they have to drop everything and GTF out.

Nature abhors a vacuum. Since the move from hard socialism to hard fascism is such a short hop I suppose no one should be surprised at this. Anyone taking bets on how long until a strong man is elevated to the top spot?

Fascism is never at "zero" in Euroland.