It seems that there's a remote wipe vulnerability for Samsung Galaxy Android phones:


An enterprising hacker has demonstrated how a simple web page can reset various Samsung phones back to the state they left the factory - enabling a click, bump or text to take out a victim's mobe entirely.

The devastating flaw lies in Samsung's dialling software, triggered by the tel protocol in a URL. It isn't applicable to all the company's Android handsets, but those that are vulnerable can have their PIN changed or be wiped completely just by visiting a web page or snapping a bad QR code, or even bonking up against the wrong wireless NFC tag.

The tel protocol is generally used with phone numbers to provide clickable "call me" links on websites: tapping on the hyperlink in the handset's web browser opens up the dialling software and calls the number contained in the link.

That's benign, but try entering *2767*3855# on a Samsung Galaxy S3 and you'll be rewarded with an impossible-to-cancel factory reset before you can say shudda-bought-an-iPhone.

Apple fanboys are hereby granted permission to be smug.

So what does this have to do with demolition derby?  Simples.  Derek emails to tell us of an amazing first:

In the future, your automobile will be locked in the same cycle of never-ending software upgrades that holds sway over computers and smartphones. For Tesla Model S owners, the future is now.
Over 100 Model S drivers will receive the auto industry’s first ever over-the-air operating system update for their new sedans within the next two weeks, Tesla says. In addition to a handful of minor code changes, the mandatory upgrade to 1.9.11 will tweak the range calculator to lower the car’s estimated driving range by 35 miles.
“Some changes may contribute to the safety parameters of the car or make material improvements to the technology,” adds Tesla spokeswoman Shanna Hendriks. ”Some changes will provide the driver the option to control/turn off any added new features — such as idle creep.”

And some changes will be sumd00d pwning your car.  Because of course the Tesla engineers haven't left security as an afterthought - they haven't thought of security at all.  Or perhaps they're the first engineers in history to ignore the get to market NOW pressures and craft a rock solid security architecture.

And so it's all fun and games until a worm takes your steering and breaking away ...

Me, I think my next car will be something like this: 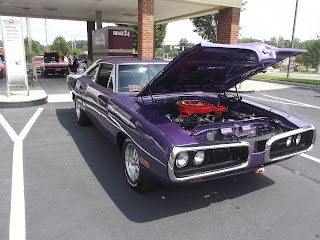 I applaud the Charger concept, but a '71? With those awful Edsel grill rings?

Interestingly enough I sent that article to you on a samsung galaxy...

I have a newer Chevy with On-star. Now that the free 6 months ran out, I am going to disable it. Oddly, most people on the forums think you are really paranoid to think that something might happen if you leave it connected. Already the stories are in on them collecting the data anyway - just in case. And of course there is that whole "disable the car" thing - but that would only be used to stop "criminals" - sorry I'm anonymous, but I'm also paranoid.

Nice car! You and the missus would look goooood in that.
It might even shorten your transcontinental record drive time.

Ahh, the 440. Pass everything on the road but a gas station. Not the best year, but certainly not the worst, and who can resist the allure of that gear reduced starter? I've a 67 Newport, myself, waiting to be released from its storage after I get this house built. 383, 4bbl afb carb, still have the original fender skirts and all 4 hubcaps. And its a points ignition car- I dont think an emp burst would do much more than distort the radio signal. Remote shutdown? No way. Just keep chasing me until I run out of fuel :-)

Excellent vehicle choice, mine is similar but in a truck configuration or an International wagon...