When all other friends desert, he remains.

In 1924, an obscure Professor in Tokyo got a dog.  Every day, Hachikō would trot down to the Shibuya Station to meet his master on his return from the day's labor.  Every day they would stroll back together to the Professor's home.  It was entirely unremarkable.

And then one day, the Professor didn't return.  He had suffered a cerebral hemorrhage while in his office and died on the spot.  Hachikō was waiting at the station, and waited in vain. 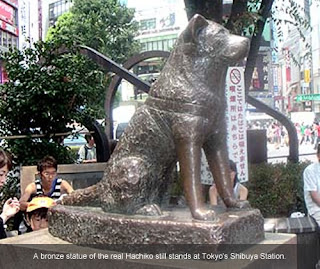 Dogs are Man's best friend because we see ourselves reflected in their eyes, not as we are but as we would be.  At our best, the dog sees himself reflected in our eyes, as he would see himself:


The one absolutely unselfish friend that man can have in this selfish world, the one that never deserts him, the one that never proves ungrateful or treacherous, is his dog. A man's dog stands by him in prosperity and poverty, in health and in sickness. He will sleep on the cold ground when the wintry winds blow and the snow drives fiercely, if only to be near his master's side. He will kiss the hand that has no food to offer, he will lick the wounds and sores that come in encounters with the roughness of the world. He guards the sleep of his pauper master as if he were a prince.When all other friends desert, he remains. When riches take wing, and reputation falls to pieces, he is as constant in his love as the sun in its journey through the heavens.
If fortune dries his master forth, an outcast in the world, friendless and homeless, the faithful dog asks no higher privilege that that of accompanying him against danger, to fight against his enemies. And when that last scene comes, and death takes his master in its embrace and his body is laid away in the cold ground, no matter if all other friends pursue their way, there, by the graveside will the noble dog be found, his head between his paws, his eyes sad, but open in alert watchfulness, faithful, and true, even in death. 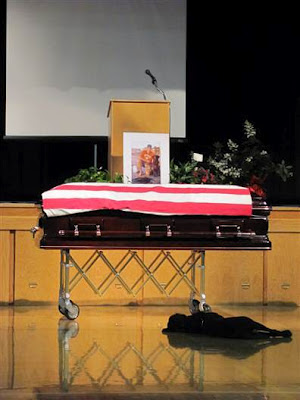 Navy SEAL Jon Tumilson lay in a coffin, draped in an American flag, in front of a tearful audience mourning his death in Afghanistan. Soon an old friend appeared, and like a fellow soldier on a battlefield, his loyal dog refused to leave him behind.
Posted by Borepatch

No fair bringing me to tears this early in the morning! Great post ... I have 5 dogs, but one among them follows me everywhere and simply wants to lay at my feet as I work each day. He lays at the foot of the bed while I sleep, he lays outside the bathroom as I bathe. There is never a time this dog would choose to not be by my side. He greets me at the gate when I return every nite from work. This dog is the truest and best friend I could ever ask.

Two points, one sappy, one not so much.

Not so much: The legendary loyalty of Hachiko was one of the factors that led to his breed, the Akita-inu, being named a Japanese national monument. There is and always has been something unique about the Akita: they have a sense of self that no other dog can match.

Wolfwalker, that video made me smile.

With a core of Something Interesting, though. Not a religious man am I, but that concept of God is one I could believe in. The man/dog relationship captures something essential about human-ness ... one can argue, with quite a bit of justification, that Man would not be what he is if he hadn't had Dog along for the ride. Dogs have added a lot to the human experience over the twenty thousand (or so) years since they became our partners.