How bad is the new iPhone mapping app?

Hitler can't find the ice cream store with it.

Google has gotten under Apple's skin, for them to replace a perfectly functional mapping app (one of the key uses of a smart phone for may people) with something is lousy: 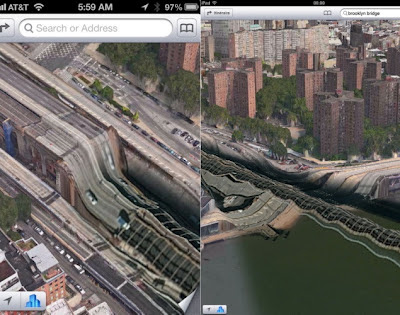 Doesn't really inspire confidence, does it?  It shouldn't:


Things aren't really off to a good start for Apple's replacement to Google Maps. Apple pushed their iOS 6 update to iPhone and iPads on Sept. 19, 2012 and it came standard with a new maps app. While the entire world is buzzing about Apple's iPhone 5 release, people are also scratching their heads when it comes to Apple Maps ... These shots of the Brooklyn Bridge would make any commuter worried to drive over it! Check out more Apple Maps fails, like incorrectly labeled cities, bridges that look like they're collapsed and other major geographical falsities ...

Incorrect information reported all over the place from the mapping app?  The only thing left to wonder is whether, when you enter the search address of "1600 Amphitheatre Parkway  Mountain View, CA" the new Apple maps app displays the result "There be dragons". I'd expect a photo of Barad-dûr, frankly. Google seems to be taking that "one ring to rule them all" thing to heart.

iOS6 is a big steaming pile of FAIL, if my friends' attempts to update their phones are any indication. Phones are getting stuck in recovery mode and even the fixes don't work well much of the time. It's Windows-level suck and fail.

Wow, when did Apple hire Escher?

I had no problems with updates. Did iPad and iPhone over the air, iPod on the PC. One left to go.

I like having turn by turn but there are definitely some mapping fails. I'm not sure what happened between apple and google maps but it seems like apple tried to build too much on their own and took for granted how difficult mapping is. Google has alot of background and experience with this world whether we see it or not. Apple needs an established partner in the business . Or go crawling back to google.
I think Passbook with be another point of gripe and confusion. I have no idea what it's for.

Yep, BIG sack of FAIL on the iMap app...

The Mountain View College Dragons! They haven't had a football program since the '90s but I think they still play basketball in one of the lower divisions.