Those wars are unjust which are undertaken without provocation. For only a war waged for revenge or defense can be just.

The neocons got us into the business of nation building, and while that may be a noble sentiment, it's a spectacular failure in Afghanistan.  It's a lesser failure in Iraq, no doubt made worse by the inepness of the current administration, but a failure it is nonetheless.  There seems to be no stomach in any political party for doing what it would take to actually succeed.

And so leaving the troops in harms way to die is criminal.It is in fact sickeningly cynical.

It's been said for some time by the military that America isn't at war, America's military is at war.  America is at the Mall.  I would add that out political class is fiddling  while our soldiers die, more worried about scoring political points or covering their butts than about the losses. 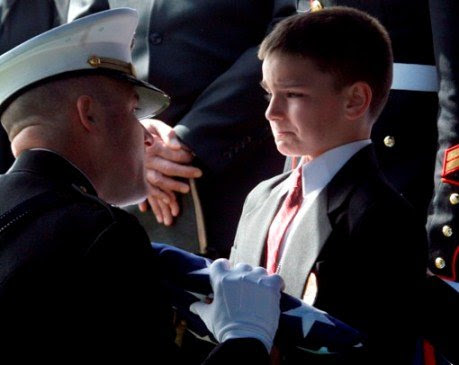 More than 10,000 Americans are dead in 9/11 and its aftermath.  Enough is enough.  Bring 'em home.  And next time, our strategy should be more rubble, less trouble.
Posted by Borepatch

Can't but agree. I was of the "nuke Mecca" crowd back in 2001, and time hasn't changed that attitude.

This time our strategy should be more rubble. Today would do. In fact, it would be appropriate.

Bring them home and watch the enemy dance in the streets in victory.

We are in a clash of civilizations. We may lose. The other side understands that. We cannot turn away from this by coming home.

To follow up, because Marooned said it better in his post today, "Never forget that there is evil out there, an evil so monstrous that words alone cannot fully capture its depravity. Men and women so thoroughly brainwashed by a demented perversion of religious zealotry that they believe it better to die while killing others than to live among them.

There is no rationalizing with these people. There is only complete and utter defeat. Whether we choose to be the victors, or the victims, lies entirely with us. They are resolute and steadfast in their quest to destroy us; only we can allow that to happen or push them back under the rocks from which they crawled out."

What ASM826 says, quotes actually and especially in the last paragraph.
And "nation building" isn't a "neo-con" thing; we started doing it LONG ago ("A Bell For Adano" anyone? MacArthur as Emperor? Marshall Plan? Balkans in mid-90's?), but you gotta HAVE a nation first and there isn't one in Afghanistan.
And yes, today would be a very GOOD day for some rubble

Why try to nation build a country of pedophiles such as Afghanistan. It's a sick and twisted barbaric country. As for Iraq well it was mission accomplished for Iran they got everything they wanted a weak neighbour that was ruled indirectly by them. China got the oil.
So well done George and Barack.

The biggest issue I see is that the Afghans and Iraqis do not seem to want a single unified nation if a nation at all. They seem to want to revert back to tribalism.

Now I could be very wrong in the way I understand things, if so then someone needs to do a better job at getting the people's story out, if I am not wrong however, I say let those people who want to build a nation do it and let the rest be.

The rot began immediately after the Japanese surrendered, with pell-mell demobilization. And it was firmly in control as of June 1950. That was when we failed to respond intelligently to North Korea’s invasion of the south.

The Truman administration sent US troops into a shooting war against an enemy nearly as fanatical as the Japanese had been. But it flinched at going for victory, even though we had vastly more war-making power than both of the puppet-masters (China, Soviet Union) who stood behind North Korea.

An attitude of refusing to do what victory requires has prevailed in every conflict we’ve had ever since. As a result we’ve squandered roughly a hundred thousand soldiers’ lives (Korea – ), while earning the contempt of every worthless, troublemaking regime on the planet.

If you want to explore in more detail these idiocies, past and continuing, see Advice to War Presidents: a Remedial Course in Statecraft by Angelo Codevilla. Much of it is directly apropos of the current diplomatic disaster.

sounds like the army i served with in 1970,i garuntee some poor son of a bitch right now is thinking "am i gonna be the last fucker greased in this worthless shithole?"
Liberty Valance

Note that I'm not saying that we shouldn't be in a fight with Jihadist Islam, just that the way that we're fighting it is stupid. Having a bunch of troops in most locations just makes them targets.

We should have learned this lesson in Beirut.

Agree completely, BP. We're not fighting; we're simply hoping the barbarians will just go away if we make enough tough grimaces at them.

And we're not dealing with the main source of problems anyway: Saudi Arabia.

See Chapter 6, "Wars Are For Winning," in Codevilla's Advice to War Presidents: "Failure to meet war with war does not bring peace."

Let's bring the troops home, wait for the goat humpers to gather in the open to celebrate, and bomb the ever loving shit out of them.