Well, we got back to the range with my nephew and Sister In Law (S-I-L), and this time we actually shot. This was a new experience, in that not only can I put up post a new shooter report, but I can shoeblog at the same time!

Now technically, S-I-L was not strictly a new shooter, as she'd been shooting once with her family when she was a girl. Since then, she hadn't shot while going to college, getting married, having kids, and seeing them grow up to become Lance Corporals. So it was pretty close to a new experience for her.

No pumps this time. Instead, the gun club was treated to tasteful black suede boots to match a tasteful black CZ 75 P-01 in 9mm parabellum. Black goes with everything, and would nicely match a gentleman's tuxedo for a New Year's Eve party. Remember to properly accessorize, gentlemen. 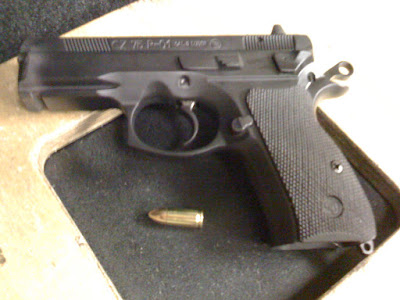 As before, we went over the four rules, plus Greg Morris' Rule Five. I would have preferred to try something smaller (New Shooter violation! Bad Ted!), like the SIG 232 in .380 ACP. However, once S-I-L figured out the "dominant eye" concept, she took to the 9mm like a duck takes to water. At 15 feet, she kept half of her rounds in the ten ring of the silhouette target.

She's going back, with hubby and Lance Corporal son in tow. I expect that she'll be giving them pointers.

The CZ 75 is a pretty friendly pistol. Recoil is modest, which was good since this was a new shooter day. The sights are very nice - black square posts with white dots on both the front and rear sights that make it very easy to allign.

The trigger is one of the two-stage variety, so there was a fair amount of take up, but then it gave a decent break. Not the best trigger I've shot, but good considering the price they charge for the pistol. In any case, it was easily manageable. If I were to buy one, I'd consider investing in a trigger job from a local gunsmith I trust, but this one is fine to shoot straight from the factory.

As for accuracy, it's more accurate than I am, although that doesn't say a whole lot. 25 feet, slow fire. 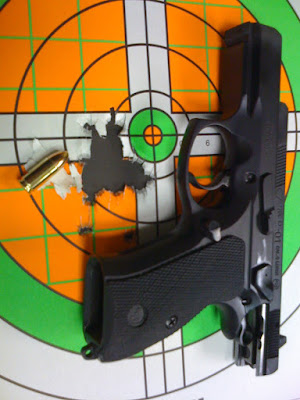 
I'm not any kind of gun or shooting expert. I like shooting, and shoot a fair number of different guns, but I'm really a dilettante. Your mileage may vary, void where prohibited.