When I moved from Atlanta to the western Boston suburbs, I bought one of the local rabbi's house. Soon after we moved in, there was a neighborhood block party. As the New People, everyone was curious about just which house I bought, and I found that after several false starts, the easiest way to describe it was "I bought the rabbi's house."

You see where this is going? One person talked to another person, who talked to a third, and by the end of the evening, I was the new rabbi.

Well, a couple months later, I was planting in the yard when one of the neighbor ladies walked by. She stopped to talk, and the converstation went something like this:


Nice Neighbor Lady: So, what are you planning on doing for Yom Kippur?

Me (a little confused): Well, we really weren't planning on doing anything.

NNL: Boy, you must really be Reformed.

Well, when I told this story to some of our Jewish friends in Atlanta, and after they stopped giggling, they gave me a new nickname: Reb Ted*. Heh.

So Joel and Corey-Jan, and all other jewish readers, Mazel Tov and Happy Hannukkah from Reb Ted and the Borepatch crew.

* When I bake bread, this was originally dubbed "Ted Bread". Now it's "Reb Ted's Ted Bread," especially at Passover. Yeah I know you don't have bread at Passover. Didn't used to. Need to be careful or you get an "oops" like Passover bread or a Santa Dreidel: 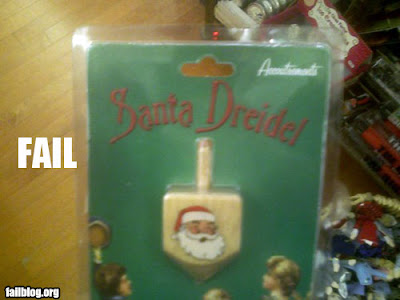