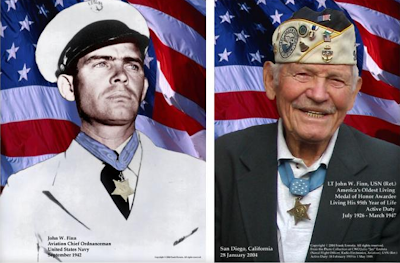 On December 7, 1941, the Imperial Japanese Fleet gave the US Navy a proper thrashing, in a surprise attack at Pearl Harbor.

Not much went right for the US that day, and most of what did was not the result of organized planning. Instead, it was almost always individual valor.

Lt. John W. Finn is the oldest living recipient of the Medal of Honor, for his acts on that day.

The oldest living Medal of Honor recipient and the first to receive the award in World War II for bravery in the attack on Pearl Harbor, Finn was awarded the Medal of Honor by Admiral Chester Nimitz for his "magnificent courage in manning a machine gun in a completely exposed area." Although hit by shrapnel 21 times, Finn continued to fire on the enemy and single-handedly brought down a Japanese aircraft.

He was just a guy, who rose to the occasion, and performed magnificently. He doesn't even have a Wikipedia page.

Lt. Finn, thank you. And thanks to your comrades who kept the light of freedom shining.

Via a comment by TetVet at To Old To Work, Too Young To Retire, who has a post up on the day that will live in infamy.
Posted by Borepatch