Military Motivator was one of my favorite sites - sometimes funny, sometimes touching motivational posters with a military theme. The site had a way for people to submit their own. Here's mine, featuring #2 Son and a sweet Winchester 1894, which got posted last spring. 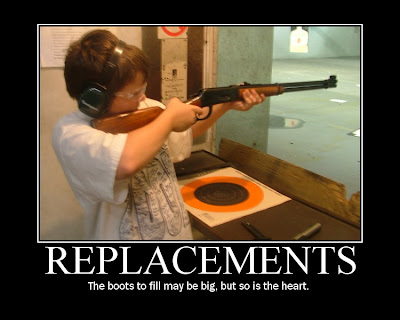 Blog has been removed

Sorry, the blog at militarymotivator.blogspot.com has been removed. This address is not available for new blogs.

Since I had the blog owner's email address from when I submitted my poster, I emailed him asking if there was anything that he could (or would) say. I haven't heard back - not even a bounce from my email.

So it looks like it's done. A few people like me are posting their submissions. Here's a site with four that cover the entire spectrum from snarky/funny to hit-you-in-the-gut. Here's another, that I hope that To Old To Work Too Young To Retire can relate to.

USO Girls has some, as does Code Monkey. Rick Lowe has interesting commentary.

Other posts by Ratnest, pal2pal, Carl, Texican Tattler, and Buttle.

If anyone knows of any others, leave a comment.

Oh, and last night's wierd post? A reader emailed saying he was getting the same message for this blog, so maybe Blogger is losing its mind. It did give ASM826 the opportunity to leave what may be the funniest comment ever left here.

UPDATE 15 February 2009: Well, I've found a site that has a bunch of the old Military Motivator pix, including mine. Personally, I don't think that it has the same heart that the old one had, but maybe that's just me.
Posted by Borepatch

Military Motivator was a favorite of mine. I wish I knew what happened, but as you say, one day it just disappeared.

I downloaded a few of the posts and used them for teaching purposes. If I can find them, I'll let you know.