First time since 1971 that "All parts of Canada" may see white Christmas. Coldest December day in Beijing in a half a century. 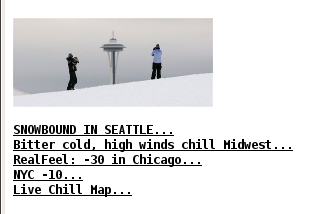 Ten below in New York City. 30 below wind chill in Chicago.

I blame Global Warming! Nothing that a major takeover of the world's economy by the Usual Suspects can't fix! And anyway, the science is settled ...